In Murray v. BEJ Minerals, LLC, No. 1:14-cv-00106-SPW, a panel of the US 9th Circuit Court of Appeals ruled on a fight over fossils of two “dueling dinosaurs”, a 22-foot-long theropod and a 28-foot-long ceratopsian, “engaged in mortal combat” when “entombed under a pile of sandstone.” 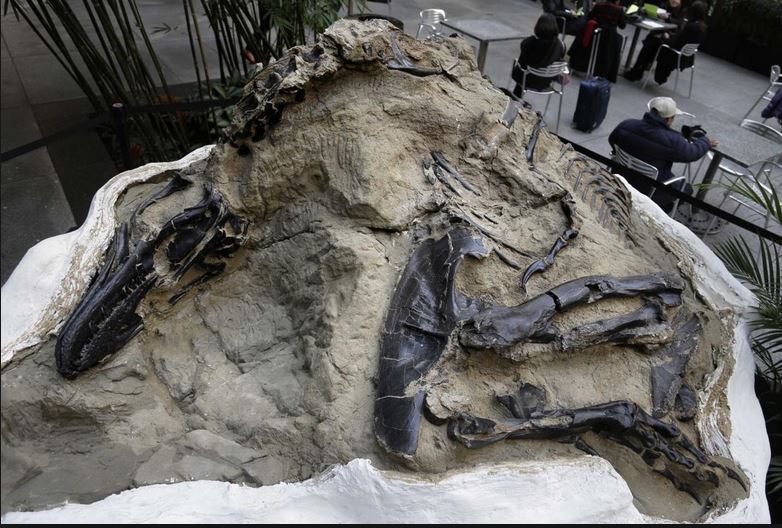 The surface owner and mineral owners then became involved in a fight over the ownership of these fossils, as well as several other fossils (including a nearly intact Tyrannosaurus Rex skeleton) found on the property. Pointing out that “oil, gas and coal all derive from the remains of plants and animals,” the mineral owner argued that the fossils are “minerals.” The court agreed with the mineral owner, citing a Montana Supreme Court case, Farley v. Booth Brothers Land & Livestock Co.,, 890 P. 2d 377, 379 (Mont. 1995), which in turn adopted a definition from a Texas Supreme Court Case, Heinatz v. Allen, 217 S.W.2d 994  (Tex. 1949):

[S]ubstances such as sand, gravel and limestone are not minerals within the ordinary and natural meaning of the word unless they are rare and exceptional in character or possess a peculiar property giving them special value, as for example sand that is valuable for making glass and limestone of such quality that it may be profitably manufactured into cement. Such substances, when they are useful only for building and road-making purposes, are not regarded as minerals in the ordinary and generally accepted meaning of the word.

The court predicted that the Montana Supreme Court would hold that the fossils “are rare and exceptional in character” and “possess a peculiar property giving them special value,” and are therefore “minerals.”

Texas courts have struggled with the meaning of minerals.  In Texas, if the instrument severing the surface from the mineral estate was executed after June 8, 1983, then building stone, limestone, caliche, surface shale, sand and gravel are a part of the surface estate as a matter of law, whereas uranium is a mineral. I wrote about the Texas definition of “minerals” back in 2009.