According to Dr. Brownlow, it makes simple economic sense to use groundwater as a resource for oil and gas exploration: The WSJ says: “Mr. Brownlow … says it takes 407 million gallons to irrigate 640 acres (one square mile) and grow abaout $200,000 worth of corn on the arid land. The same amount of water, he says, could be used to frack enough wells to generate $2.5 billion worth of oil. ‘No water, no frack, no wealth,’ says Mr. Brownlow, who has leased his cattle ranch for oil exploration.”

Most of the Eagle Ford lies above the Carrizo aquifer, which stretches from Webb County on the Rio Grande River up through Fayette County. Dr. Brownlow, a hydrologist, concludes that there is plenty of water in the Carrizo, in most places, to meet the demands for frac water. His estimates:

Dr. Brownlow says that, if a successful Eagle Ford well makes 300,000 to 400,000 barrels of oil at $80/bbl, the return to the landowner would be $520,000 per acre-foot ($1.60 per gallon). In contrast, the return to a farmer using  the same acre-foot of water to irrigate corn, peanuts or coastal hay would be $500 to $1,000 per acre, or about $250 per acre-foot of irrigation water. “The point here is that using groundwater from the Carrizo for hydraulic fracturing in the Eagle Ford Shale has enormous economic potential for landowners, oil production companies and the entire region. Moreover, from a geologic and water planning perspective, additional impact on the aquifer appears minimal,” says Dr. Brownlow.

Below is an analysis of data from the Texas Water Development Board, done by the WSJ: 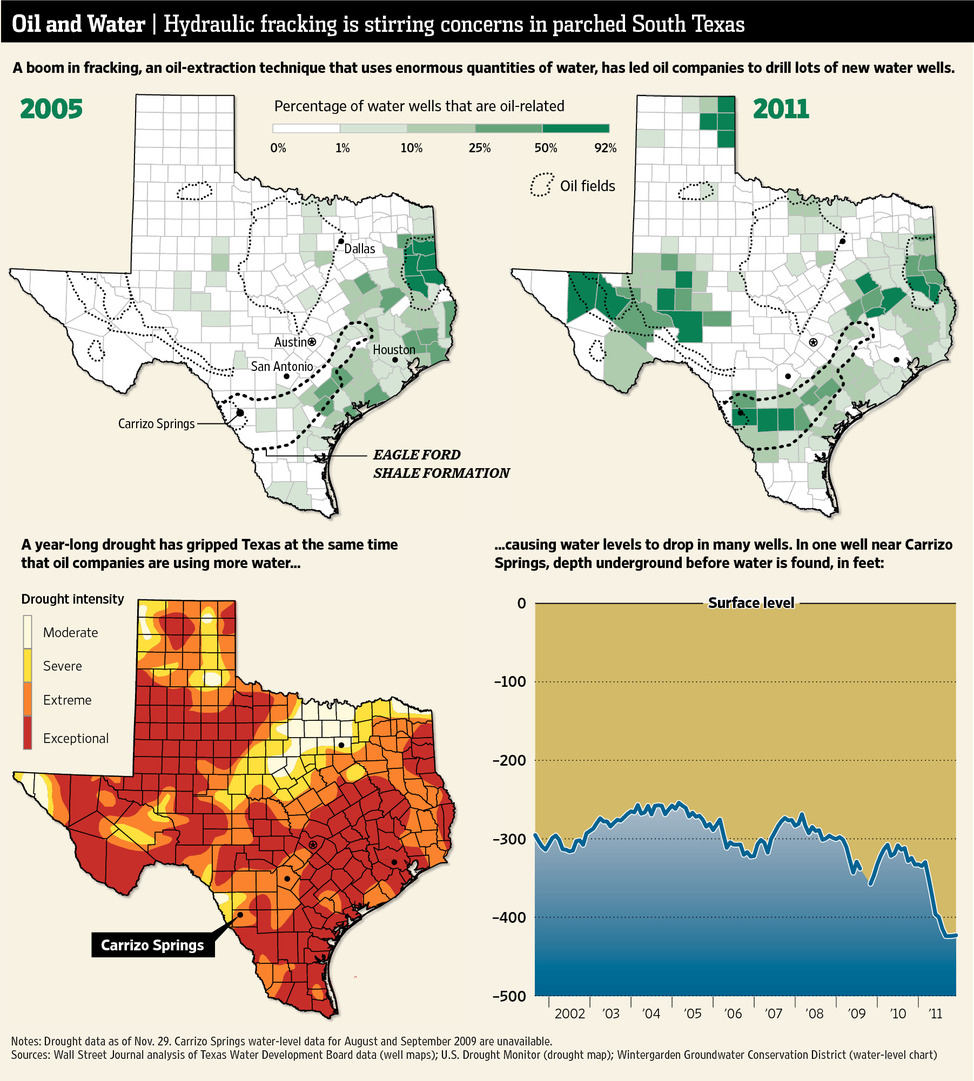 The oil and gas industry uses only 1.6% of the water consumed in the state. But this use is concentrated in areas where drilling activity is located, often in arid portions of the state, and the use is growing rapidly. As can be seen from the above graph of one water well, if your well is the one affected, it is an important issue. And the water used for fracing in the Eagle Ford is not returned to the ecosystem; it either remains in the formation, or if it returns to the surface, is it reinjected into licensed disposal wells.

In Texas, the oil and gas industry is exempted from regulation by local underground water districts, which have authority to permit and regulate withdrawals from underground aquifers. Those water districts are now in the middle of establishing “desired future conditions” for the aquifers within their jurisdiction and rules to assure that withdrawals are regulated so that those desired future conditions are met. Because those water districts have no authority to regulate wells used for oil and gas exploration, they cannot predict or control the effect of industry uses on their future supplies of water.

The issues raised by industry use of groundwater just go to prove the old Texas saying, “Whiskey’s for drinkin’, water’s for fightin’.”