I recently ran across an article on the Energy In Depth website titled “Turning Natural Gas Into Water: Hydraulic Fracturing Doesn’t Deplete Water Supplies.”  Energy In Depth is a website of the Independent Petroleum Association of America dedicated to “a research, education and public outreach campaign focused on getting the facts out about the promise and potential of responsibly developing America’s onshore energy resource base ” The article responds to an argument made by many organizations concerned about the large quantities of water used in fracing. The concern is that, while many uses of water return that water to the water cycle, water used in fracing is usually disposed of by injecting it underground, where it will never return to the water cycle.

Energy In Depth’s response to this argument is that, while injecting the used frac water — called “flowback” — does remove that water from the water cycle, the burning of the gas (or oil) produced by the wells creates more water than was used in the fracing of the wells.  So, the argument goes, fracing of wells actually “creates” new water that is added to the water cycle.  EID’s article goes on to calculate that, while a typical Marcellus gas well will remove 4 million gallons of water from the water cycle, that well will produce two billion cubic feet of gas which, when burned, will yield about 22 million gallons of “new” water.  Within the well’s first six months of production, the gas it produces will create more than 4 million gallons of water when burned as fuel.  Problem solved!

I asked a hydrologist friend of mine to look at EID’s calculations. He agreed that their math is correct, but he cautioned that the problem is not so simple.  EID’s argument assumes that the energy created by burning the natural gas from EID’s typical well would not have been created by the burning of other fossil fuels.  If, in other words, the gas is burned to create electricity, and if that electricity would have been created by burning coal if the well had not been drilled, then the net result is that water has been lost to the water cycle by injecting the flowback from the well.

EID’s argument also fails to consider local conditions. Almost all of the water used for fracing in the Eagle Ford and in the Permian Basin in West Texas is groundwater. Those groundwater resources are already being depleted much faster than they are being recharged, mostly from agricultural and municipal demand, but exacerbated by the current drought and the demands of the oil industry. Even though the burning of the oil and gas produced from those areas does produce new water molecules into the water cycle, that fact does not replenish the aquifers or increase the chances of rain in those arid parts of our state.

The US Energy Information Administration recently projected that world consumption of energy from all fuel sources would increase by 56% through 2040. Most of that increase will come from burning fossil fuels. 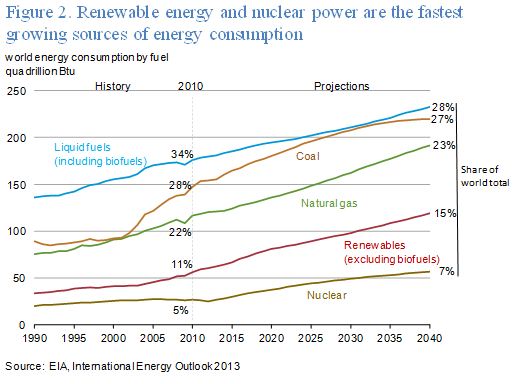 Burning all of that fossil fuel will certainly create lots of “new” water.  Is that a good thing for the environment?

Energy generation uses huge quantities of water. Nuclear plants as well as electric generation using fossil fuels require water for coolant. While that water stays in the water cycle, it is nevertheless a demand that must be met, and in Texas that demand is increasing exponentially. Only wind and solar energy need no water to generate electricity, and – even though Texas is the US leader in wind energy — wind and solar are as yet a small part of electricity production.

A recent article in the Christian Science Monitor calls for recyclying of frac water. Some companies are experimenting with use of brackish (salty) water aquifers. EID and its sponsoring companies would do well to increase industry’s efforts to reduce or eliminate use of underground water in hydraulic fracturing.