Researchers at the Nicholas School of the Environment at Duke University have written an article published in the Proceedings of the National Academy of Sciences titled “Methane contamination of drinking water accompanying gas-well drilling and hydraulic fracturing,” which finds “systematic evidence for methane contamination of drinking water associated with shale-gas extraction” in the Marcellus Shale in Pennsylvania and New York. The article has already elicited a strong response from the industry. To my knowledge, this is the first scientifically based study finding a correllation between the drilling of shale wells and the contamination of aquifers.

The authors analyzed the groundwater in three ways: to measure dissolved concentrations of methane and higher-chain hydrocarbons, carbon and hydrogen isotope ratios of methane, and dissolved salts.

First, the authors compared the amount of methane dissolved in water wells closer than one kilometer to a gas well (“active areas”) to that in water wells less than one kilometer from a gas well (“nonactive areas”). They found that “methane concentrations were 17 times higher on average … in shallow wells from active drilling extraction areas than in wells from nonactive areas.” They illustrated the results of this analysis by the following chart: 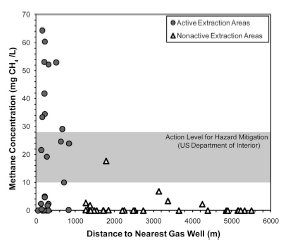 The authors state that methane was found in 51 of the 60 wells sampled for methane.

Second, the authors analyzed the ratio of methane to higher-chain hydrocarbons (ethane, propane and butane) in the water samples. They hypothesized that this measurement could be used do differentiate shallower, biologically derived methane from deeper physically derived thermogenic methane found in the Marcellus and other gas-bearing formations.  They concluded that dissolved gas is more thermogenic in water wells within one kilometer of active gas wells and is more biologic in water wells more than one kilometer from active gas wells. In other words, gas from the Marcellus is “the most likely source of the high methane concentrations observed in the shallow water wells from active extraction sites.”

Third, the authors tested the well water for brines and saline fracturing fluids. None of the water wells tested contained elevated levels of chlorides, and there was no measurable difference between chlorides in water from wells in “active” areas and those in “inactive” areas. They concluded that it was unlikely that the methane contamination came from “physical displacement of gas-rich deep solutions from the target formation.”

The authors said there were two other ways that methane could travel from the Marcellus into groundwater: from “leaky gas-well casings,” or from new fractures or enlarged existing fractures above the Marcellus created by the hydraulic fracturing process.  The authors said it was “less likely” that the methane would travel through new fractures created or enlarged by the fracking of wells:  “Methane migration through the 1- to 2-km-thick geological formations that overlie the Marcellus and Utica shales is less likely as a mechanism for methane contamination than leaky well casings, but might be possible due to both the extensive fracture systems reported for these formations and the many older, uncased wells drilled and abandoned over the last century and a half in Pennsylvania and New York.”

The authors concluded that additional data on groundwater quality should be collected, additional research is needed on the mechanism of methane contamination, and “greater stewardship, knowledge, and–possibly–regulation are needed to ensure the sustainable future of shale-gas extraction.”

Energy In Depth, an industry lobby association, has already criticized the study.  “It’s amazing these guys are this comfortable making these kinds of conclusions with a data set this small, no random sampling, and no baseline information to speak of whatsoever,” said Chris Tucker, a spokesman for Energy in Depth, in a statement.

“There are important aspects of the study that Range and others consider questionable or incomplete. We intend to reach out to the researchers and provide them additional information to help fill in the gaps. Despite its short-comings, the Duke study raises awareness on an important issue that Range spearheaded and worked on with the Pennsylvania DEP over the last several years regarding natural gas migration. We know the geology is unique in northeast Pennsylvania. Naturally occurring gas migration has been a documented issue in this part of the country for decades. In northeast Pennsylvania improperly designed or constructed natural gas wells may cause or increase naturally migrating gas. As a result, earlier this year Pennsylvania instituted strengthened regulations and standards that focus on well design and construction, among other enhancements, that address this issue head on. This was an initiative that Range led and supported in Pennsylvania, along with other responsible companies and stakeholders. These new well design and construction regulations are now law and all companies operating in Pennsylvania are required to follow them. Pennsylvania now has among the best standards and regulations for natural gas well design and construction in the nation.

“The Duke study further demonstrates hydraulic fracturing has not impacted ground water, a point mentioned several times by the authors and supported by the fact they found no fracturing fluids in any of the water they sampled.

“In many ways this is an issue of public trust. Range believes a big part of getting it right, includes transparent and honest dialogue, regardless whether we agree with every aspect of this study. The opportunity is far too great for Pennsylvania and the rest of the United States to not get this right. People must know that the industry will get this right and that the regulators will make certain we do. Pennsylvania’s new tougher standards for well design and construction are a clear example. In order to do this right, we need thoughtful, fact-based dialogue from a variety of perspectives. The least productive action anyone can take is to craft reports designed to support only the desired conclusions of the authors. The people of Pennsylvania deserve more and the people of this nation deserve more.”