A seismic survey is conducted by creating a shock wave – a seismic wave – on the surface of the ground along a predetermined line, using an energy source. The seismic wave travels into the earth, is reflected by subsurface formations, and returns to the surface where it is recorded by receivers called geophones – similar to microphones. The seismic waves are created either by smalle xplosive charges set off in shallow holes (“shot holes“) or by large vehicles equipped with heave plates (“Veibroseis” trucks) that vibrate on the ground. By analyzing the time it takes for the seismic waves to reflect off of subsurface formations and return to the surface, a geophysicist can map subsurface formations and anomalies and predict where oil or gas may be trapped in sufficient quantities for exploration activities. 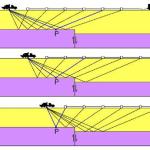 Until relatively recently, seismic surveys were conducted along a single line on the ground, and their analysis created a two-dimensional picture akin to a slice through the earth beneath that line, showing the subsurface geology along that line. This is referred to as two-dimensional or 2D seismic data. 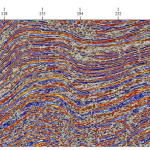 In the last 20-30 years, with the development of computers, geophysicists have been able to take seismic testing to a new level by conducting three-dimensional, or 3D, seismic tests. In 1980, about 100 3D surveys had been performed. By the mid 1990’s, 200 to 300 3-D surveys were being performed each year. In the 1980’s it took the most sophisticated Cray computers to analyze the data. Today, the analysis is performed on super-desk-top computers. Currently, almost all oil and gas exploratory wells are preceded by 3-D seismic surveys. The basic method of testing is the same as for 2D, but instead of a single line of energy source points and receiver points, the source points and receiver points are laid out in a grid across the property. The resulting recorded reflections received at each receiver point come from all directions, and sophisticated computer programs can analyze this data to create a three-dimensional image of the subsurface. 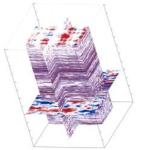 3D surveys can be conducted in almost any environment – in the ocean, in swamps, and in urban areas. A 3D seismic survey may cover many square miles of land and may cost $40,000 to $100,000 per square mile or more. The data obtained from such a survey is therefore very valuable, and if protected from disclosure constitutes a trade secret.  Seismic datea is licensed, bought and sold by seismic survey companies, brokers and exploration companies.

There are three phases of seismic surveys:  data acquisition, processing, and interpretation.

In on-shore data acquisition the energy source for a seismic survey is either Vibroseis or an explosive charge, generally some form of dynamite or an explosive product called primacord.  A Vibroseis truck has a large metal plate under the center of the truck body that is lowered onto the ground so that the entire weight of the truck is on the plate.  The plate is then caused to vibrate at a specified power and frequency, creating seismic waves that travel into the ground.  A single vibrator truck can generate more than 40,000 pounds of ground force, and usually four or five trucks are clustered together to create the energy at each source point, creating a combined ground force of 150,000 to 200,000 pounds. 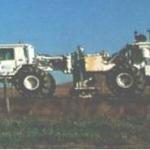 If the energy souce is an explosive charge, the charge is usually set of in a hole between 10 and 150 feet deep, drilled for that purpose. Hole depths rarely exceed 80 feet. The charge is a specified number of pounds of explosive – from 2 to 50 pounds, depending on the depth of the hole.

The area covered by the 3D grid must be larger than the subsurface area to be imaged, in order to acquire sufficient data for the area of interest. Generally, in order to acquire “full-fold data for an area, souce and receiver points must be laid one-half to one mile beyond the boundary of the area of interest. The additional data acquired in this “halo” on the outer edge of a 3-D survey is sometimes called “tails.” If, therefore, a landowner’s property is on the outer edge of a 3D survey, the permitting of his land as part of the survey will not be for the purpose of exploring the subsurface of his property, but for the purpose of acquiring a “full-fold” image of the adjacent property nearer the center of the survey. The quality of the subsurface data at the edge of the survey will not ordinarily be sufficient to map and evaluate the subsurface of these “tail” areas.

3D surveys must be conducted over a large area in order to provide sufficient data for accurate interpration of the subsurface gdology. 3D surveys commonly cover 50 to 100 square miles or more. 3D surveys conducted at different times and covering different but adjacent areas can later be combined into a single data set for processing and analysis, provided there is sufficient overlap of the areas covered by the two surveys.

The data recorded from a seismic survey is originally in its “raw” or “unprocessed” form. Before it can be used it must go through a series of computerized processes. These processes – filtering, stacking, migrating and other computer analysis, make the data useable and require powerful computers and sophisticated computer programs. As computers have become more powerful and processing techniques more sophisticated, it has become common to re-process seismic data acquired in earlier years, creating new opportunities for exploration that could not originally be derived from the 3D data. Processing of data can be very expensive and time-consuming, depending on the size of the area surveyed and the amount of data acquire. Processing of data from one 3D survey may take six months or more and cost hundreds of thousands of dollars.

Finally, the resulting processed data must be interpreted by the geophysicist or geologist. All seismic data is subject o interpretation, and no two experts will interpret data identically. Geology is still a subjective science. Although dry holes have been greatly reduced by 3D seismic technology, they have not been eliminated. The proper interpretation of 3D data is a critical step in the process.