In 1940 Judge Allred ruled on a case involving the National Firearms Act, one of the country’s first efforts at gun control. A series of crimes in the early 1930s – the Lindbergh kidnapping, John Dillinger, Bonnie and Clyde, and Ma Barker – resulted in Roosevelt efforts to increase federal police powers. One of those efforts was the National Firearms Act, which regulated the firearms industry and imposed a tax on firearms dealers. The Act survived challenges based on the 2nd Amendment right to bear arms. But in 1940, Judge Allred heard U.S. v. Platt, 31 F.Supp.788. Platt had been convicted of a crime in 1933; the Act, passed in 1938, made it illegal for him to own a gun, as a convicted felon, and he was arrested in 1939 for carrying a gun. Platt challenged the law as an ex post facto (retroactive) law as applied to him, because it was passed after his original conviction. Allred disagreed and Platt was found guilty under the Act.

Now to the case I remembered, Sun Oil Co. v. Humble Oil & Refining Co., decided in Judge Allred’s second term on the bench. The case involved competing claims by Sun and Humble to oil and gas leasehold rights in an area of the Laguna Madre commonly called the “Land Cut.” It is a vast mud flat, some 30,000 acres, lying between the mainland and Padre Island. Sun acquired an oil and gas lease from the State, the owner of submerged lands forming the Laguna Madre. Humble acquired a lease from the owner of the adjacent upland, the ranch owned by Sarita Kenedy East, a Kenedy Ranch heir. Judge Allred ruled in favor of Sun and the State, and the Fifth Circuit affirmed, 190 F.2d 191 (1951). Humble contended the mud flats were originally a part of the bed of the Laguna but had been built up by accretion to the mainland. Judge Allred disagreed. He held that the edge of the shore was the limit of where the water reached the upland:

One of the things that impels me to this conclusion is a report, accompanied by a sketch made by Lieutenant Meade (later General Meade) in February, 1846, while serving under Zachary Taylor, preliminary to the invasion of Mexico. (Plaintiff’s Exhibit No. 88.) It is an historical fact that General Taylor’s army landed at Flour Bluff, near Corpus Christi, north of the area involved. Lieutenant Meade explored the possibility of transporting various army equipment across Laguna Madre to Padre Island and continuing down the island to near Brownsville. Circumstantially, he seems to have arrived at a point opposite or near the southeast end of Lopena Island and reported the finding of flats and water at about the same depth as it is on the ground today. He stated that information was received that ‘this flat extended some 14 miles down, with only 14 inches of water, and beyond there was a good channel for 14 miles to the Colorado and from thence down to the Brazos Santiago.’ This 14 miles from the same approximate point east of Lopena would go over to the very flats area as it is today, and, roughly, to Redfish Bay on the South. Since this was in February of 1846, at a time of the year when the evidence shows that the waters of the sea now roll in, over, and upon the area involved, the depths of the water and the observations of Lieutenant Meade are significant to my mind. The line of demarcation between the Laguna and the mainland is still patent for all to see. The area in controversy, as well as the entire bed of the lagoon, is not fast land. Nothing grows or can be grown upon it.

Now to the case in which our firm participated, John G. and Marie Stella Kenedy Memorial Foundation and Corpus Christi Diocese of the Roman Catholic Church v. David Dewhurst, Commissioner of the General Land Office, and the State of Texas, 90 S.W.3d (Tex. 2002). This case is essentially the same fight over the same land.

The Kenedy Memorial Foundation is successor to Sarita Kenedy East, the Kenedy Ranch heir who had leased to Humble. (The fight over title to the Kenedy ranch after Sarita’s death is the subject of a fascinating book, “If You Love Me, You Will Do My Will” by Stephen Michaud.) The Foundation sued to recover the Land Cut; our firm represented the State. But in this case, the plaintiff had a different theory: the Land Cut, being above the elevation of the line of mean higher high tide, was not submerged land.

The case was tried to a jury before Judge Scott McCown in Travis County, resulting in a judgment for the State which was affirmed by the Austin Court of Appeals, 944 S.W.2d 285 (1999).

The case was argued twice before the Texas Supreme Court. After the first hearing in the Court issued an opinion affirming the judgment. But after granting the Foundation’s motion for rehearing and hearing arguments a second time, the Court reversed and held that the mud flats belong to the Foundation (up to the edge of the Intracoastal Waterway, which bisects the Land Cut). The opinion, by Justice Hecht, was joined by five other justices; Justice Enoch filed a dissenting opinion joined by Justices Baker and Hankinson. The Court rejected the State’s argument that the previous adjudication of ownership of the Land Cut in Sun v. Humble precluded re-litigation of the title.

So, what is “mean higher high tide,” and why did the Supreme Court use it to mark the edge of the Laguna Madre? Mean higher high tide, or mean higher high water, is “the average height of all the daily higher high waters recorded over a 19-year period or a computed equivalent period.” (Nineteen years is the complete tidal cycle.) The line of MHHT was adopted as the edge of the seabed adjacent to Spanish and Mexican land grants in Luttes v. State, 324 S.W.2d 167 (Tex. 1958) – after Judge Allred had decided Sun v. Humble. In an opinion by Justice St. John Garwood (who later was of counsel at our firm, and whose son, Will Garwood, was a partner in our firm and served on the 5th Circuit Court of Appeals), the Court adopted MHHT as the boundary of 3,400 acres of mud flats in Cameron County.

Title to lands granted when Texas was under Spanish and Mexican jurisdiction is governed by the Spanish and Mexican laws in effect at the time of the grant. The Luttes Court noted that the Spanish law of the shore is set out in Partida 3, Title 28, Law 4 of Las Siete Partidas, written in the 13th century, which says the “shore” is excluded from any grant of littoral lands, and defines the shore as follows:

*** and all that place is called shore of the sea insomuch as it is covered by the water of the latter, however most it grows in all the year, be it in time of winter or summer.

(This is why most Texas beaches are public lands, because most upland grants were Spanish or Mexican land grants.)

But the Court held that the line should be more precisely drawn using MHHT:

… we think the language of the partidas of itself permits, and common sense suggests, a line based on a long term average of daily highest water levels, rather than a line based on some theory of occasional or sporadic highest waters. Indeed, such appears to us to be consistent with one of the primary arguments of the State itself to the effect that the true line should be one evidenced by more or less permanent markings on the ground of the kind ordinarily associated with the upper line of a shore. Whatever the aspect of the ground in the instant case, ordinarily a ‘shore line’ is one characteristic of regular and frequent coverage by the sea, which in turn is much more closely related to an average of daily highest waters than to one, or an average of merely a few, highest annual readings.

The lunar tide in the Laguna Madre, particularly at the Land Cut, is almost indiscernible. The mud flats are instead inundated by wind tides, pushed up onto the flats by the wind.

Here is a Google Earth image of the Land Cut at a time when most of it is covered with water. The Intracoastal Canal can be seen cutting through it. (click on image to enlarge) 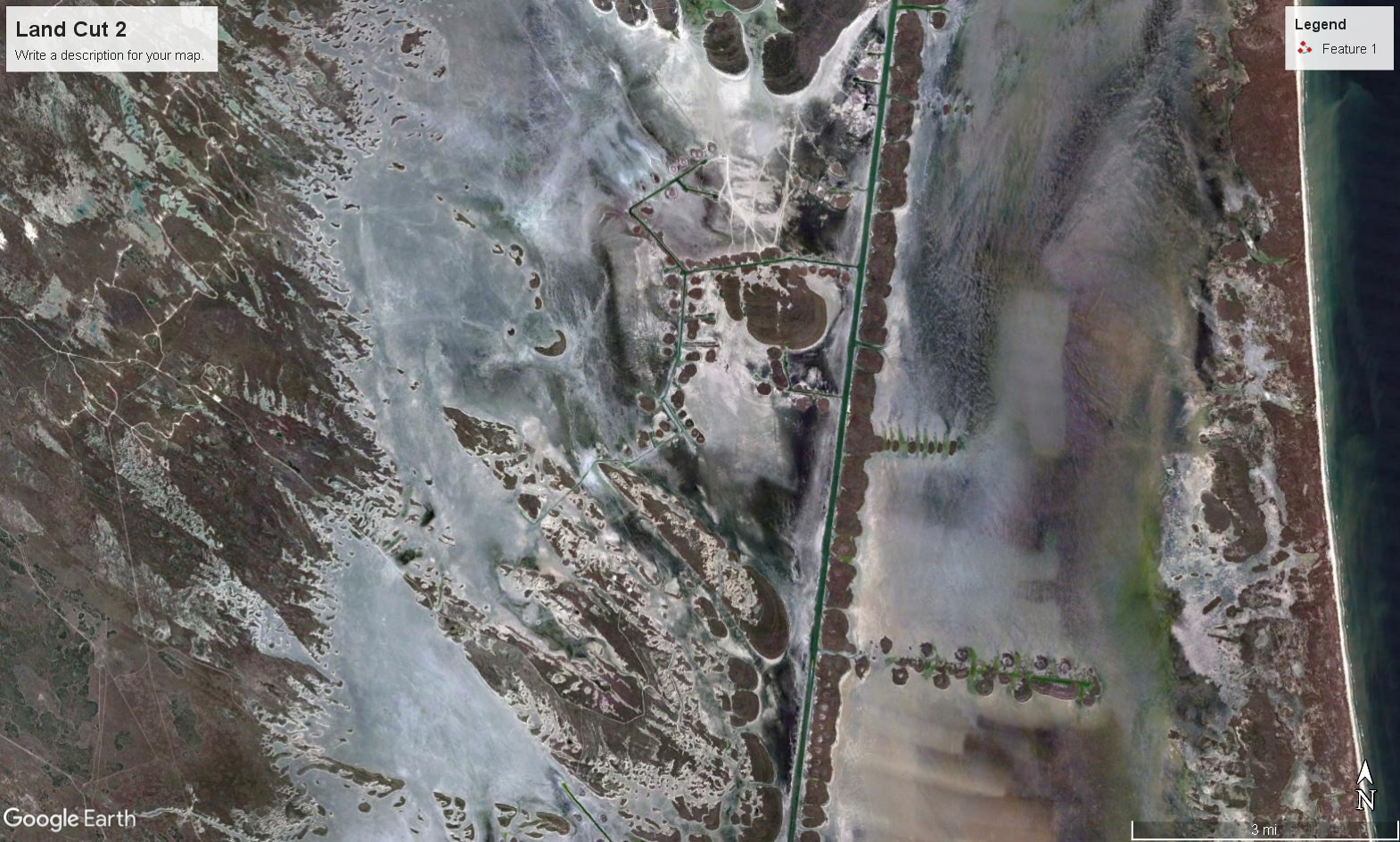