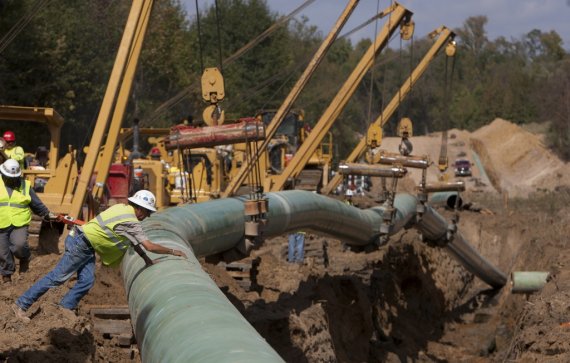 Not a small operation. And this one, of protesters who camped in trees, causing the company to re-route a segment of the line: 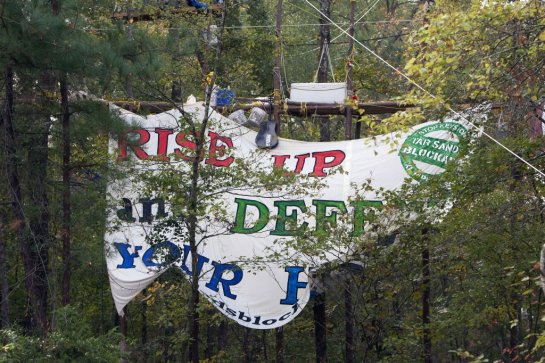 TransCanada has 4,000 workers installing this 36-inch line through 500 miles of Texas and connecting to Cushing, Oklahoma. It will be capable of moving 700,000 barrels of Canadian tar sand crude to the Texas Gulf Coast.

Shale Jobs Could Affect Voting in Swing States – Forbes says that development of the Utica Shale in Ohio is leading a job recovery there, with estimates of 200,000 jobs by 2015, $12 billion in new wages and $22 billion in increased economic output. Five of the states that stand to gain the most from the shale boom are political swing states. “Or measured another way: the number of new workers that will come from hydrocarbon expansion equals one-fifth to three-fourths of all those people counted as unemployed or underemployed in at least 20 states, including those in Wisconsin, Colorado, Iowa, Ohio and Pennsylvania.”

Wind Energy Tax Credits – Also on the political front, a little-mentioned issue in the presidential campaign is the tax credit for wind energy, which expires at the end of this year. Obama wants it extended, Romney does not. Some swing states are among the nation’s leaders in new wind power projects. Navigant Consulting produced a study saying that loss of the tax credit could cost 37,000 jobs. Texas Governor Rick Perry opposes extending the credit, although Texas leads the nation in wind energy, and companies are now spending huge sums erecting transmission lines into North and West Texas to distribute electricity from wind projects already constructed or on the drawing board. But Sam Brownback, Republican governor of Kansas, and the two Kansas senators, want it extended. The Kansas City Star has a good article on the issue.

Improving Technology Could Extend Shale Boom – Here is a good article from Reuters on the potential for improved shale technology to further extend the shale boom.  According to reporter Robert Campbell,

The prospect for technological advances in shale oil and gas extraction is one of the major reasons why some opponents of peak oil theories, like Nansen Saleri, a former Saudi Aramco executive who now heads upstream technology consultancy Quantum Reservoir Impact, are optimistic about the prospect for liquid fuels production. ‘In a few years the techniques used today for fracking will be viewed as primitive,’ Saleri said in an interview this summer.

Range Resources Continues its Cutting-Edge Battles – David Poole, General Counsel for Range Resources, was honored by the Dallas-Fort Worth Chapter of the Association of Corporate Counsel and D CEO magazine for his work in leading the legal fight against the EPA’s allegations that Range had contaminated groundwater in Parker County, Texas. Partly as a result of Range’s success in that case, Al Amendariz, then regional EPA adminstrator, resigned, after EPA dropped its suit. Meanwhile, Range battles a separate suit in Washington County, Pennsylvania alleging that its frac’ing operations there have contaminated groundwater.