To understand the case, it is helpful to look at the plat below (click to enlarge): 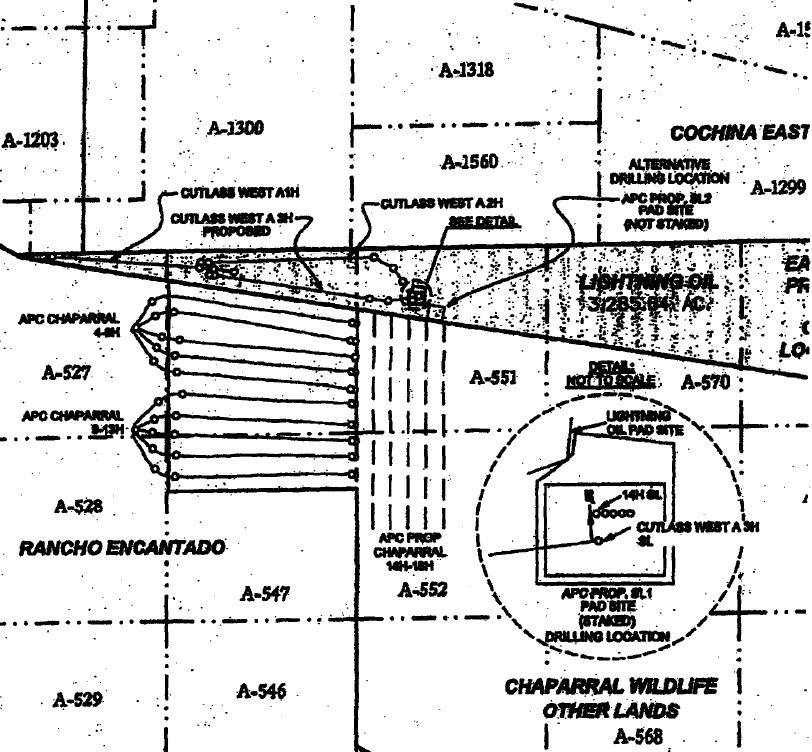 Lightning Oil owns an oil and gas lease on the knife-shaped tract. The surface estate of the tract is part of the Briscoe Ranch in Dimmit County, which includes lands to the north. To the south lies the Chaparral Wildlife Refuge, owned by the State and managed by Texas Parks & Wildlife. Anadarko obtained a lease from the State on the Refuge. That lease made it difficult to use the surface estate of the Refuge to drill wells, and Anadarko made an agreement with the Briscoe Ranch to allow Annadarko to put drilling pads on the Ranch (and on Lightning Oil’s oil and gas lease) to drill horizontal wells that would produce from the Refuge. Lightning Oil sued Anadarko claiming that its wells would trespass on Lightning’s mineral estate, even though no well perforations would be on Lightning Oil’s lease.

The Court affirmed prior precedent that the owner of the mineral estate owns only the minerals embedded in the subsurface, and the surface owner owns the “mass” of the subsurface and the pore space in which the minerals are located. Lightning argued that, by drilling through its lease, Anadarko would actually “produce” oil and gas from Lightning’s lease, because the oil and gas contained in the drill cuttings made when Anadarko penetrates through the ground would belong to Lightning. The Court concluded that, while Lightning was correct, off-lease drilling locations for horizontal wells “provide the most efficient means of fully exploiting the minerals through horizontal drilling,” and “balanced against the small loss of minerals a lessee such as Lightning will suffer, if drilling through the minerals is determined to be a non-actionable interference with its property rights, is the longstanding policy of this state to encourage maximum recovery of minerals and to minimize waste. … That being so, we conclude that the lose of minerals Lightning will suffer by a well being drilled through its mineral estate is not a sufficient injury to support a claim for trespass.”

Lightning speculates that Anadarko’s proposed well sites, drilling activities, and underground well structures will interfere with both the surface and subsurface spaces necessary for it to exercise its right to develop the minerals in the future. But speculation is not enough. To obtain injunctive relief, Lightning must have proved that absent such relief, it will suffer imminent, irreparable harm.”

The Court also concluded that the accommodation doctrine requires the surface estate owner (in this case Anadarko, as assignee from Briscoe) and the mineral owner (Lightning) to accommodate each other’s use, and Lightning “has advanced no reason that convinces us the doctrine will not be flexible enough to do so ….”