The debate about effects of Barnett Shale drilling and production on air quality in the Dallas-Fort Worth area continues. The debate started when Al Armendariz, then a professor at Southern Methodist University, published a study in 2009 concluding that increased drilling activity in the DFW area would greatly increase polllution and ozone levels. Armendariz postulated that in the nine counties included in the D-FW metroplex area, gas drilling produced about 112 tons per day of pollution, compared with 120 tons per day from vehicle traffic. His study was sponsored by the Environmental Defense Fund, and was heavily criticized by industry. Armendariz was later appointed head of the Dallas office of the EPA, and resigned earlier this year amid Congressional criticism of remarks he made about EPA enforcement policies.

As a result of Armendariz’s study, the Texas Commission on Environmental Quality installed automatic air monitors at locations within the Barnett Shale area. Eight automatic gas chromatographs now sample air twenty times each day for 46 volatile organic compounds. The monitors cost $250,000 each and cost $100,000/year to operate. Readings from the sample analyses are posted by the TCEQ and can be found here.  According to an analysis by Powell Shale Digest, none of the 236,120 air samples taken by these devices have shown amounts of VOCs exceeding limits set by the Environmental Protection Agency.

There are also sixteen samplers in the DFW area that measure ozone. Powell’s analysis of that data shows that ozone levels in the Barnett Shale have been dropping even as drilling activity in the area increased: 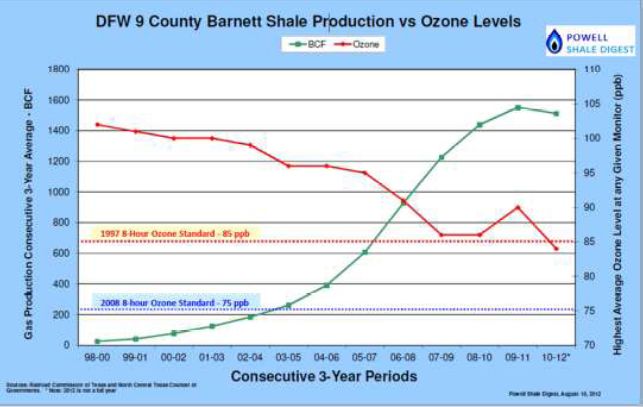 This scientific data from millions of tests run by the TCEQ in the Barnett Shale plus the shale gas production plots against the ozone levels show no influence caused by shale gas development and production on air quality. The Barnett Shale area of north Texas has been the most thoroughly tested air quality of any industry. This scientific data plus thousands of other tests run by the TCEQ laboratories in Texas totally contradict the fear of polluted air quality caused by shale development in the United States and throughout the world.

Notwithstanding the TCEQ’s data, the debate continues:

A study published in the August 2012 issue of the Journal of the Air & Waste Management Association, Vol. 62, Issue 8, “The Potential Near-Source Ozone Impacts of Upstream Oil and Gas Industry Emissions,” by Eduardo Olaguer of the Houston Advanced Research Center, concludes that, based on Olaguer’s model of air dispersion, “under average midday conditions in June, regular emissions mostly associated with compressor engines may increase ambient ozone in the Barnett Shale by more than 3 ppb beginning at about 2 KM downwind of the facility, assuming there are no other major sources of ozone precursors.”

Olaguer’s study was immediately criticized by Energy in Depth, an industry research, education and public outrach organization, as a part of “the anti-shale crowd’s agenda” containing multiple errors and oversights. Dr. Olaguer’s response to Energy in Depth’s criticism can be found here. He says that the TCEQ’s monitoring network “remains to sparse to reliably draw conclusions about air emissions from individual oil and gas sites.”

Dr.Ed Ireland of the Barnett Shale Energy Eduction Council also criticized Olaguer’s paper as “grounded on some erroneous assumptions, a failure to consider existing air control regulations and some misinterpretations of other study results.” Dr. Olaguer also responded to Dr. Ireland’s critique: Dr. Olaguer’s paper was peer-reviewed in three publications; and “the acqual effectiveness of [fedeal and state regulations on emissions] has yet to be studied in a satisfactory manner.”

And so it goes.