A study group sponsored by the Massachusetts Institute of Technology has issued a report, The Future of Natural Gas, the fourth in a series of MIT multidisciplinary reports examinging the role of various energy sources and the effects of carbon dioxide emissions restraints.  The full 170-page report can be found here. The report analyzes the relative carbon footprint of natural gas compared to other fuels and the environmental impact of the development of shale gas reserves, among other topics. Here are some excerpts:

Major conclusions of the report:

Regarding gas’s carbon footprint, the report concludes that “Among
the fossil fuels, it has the lowest carbon intensity, emitting less CO2
per unit of energy generated than other fossil fuels. It burns cleanly
and efficiently, with very few non-carbon emissions. Unlike oil, natural gas generally requires limited processing to prepare it for end use.”

Charts from the report illustrating supply: 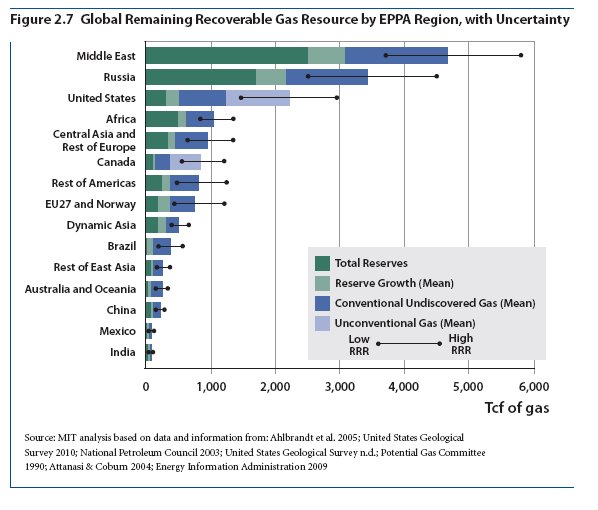 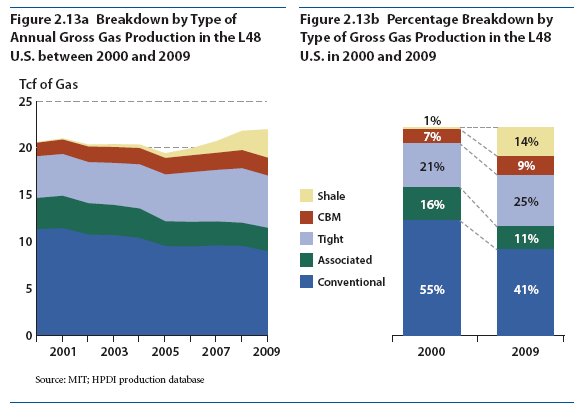 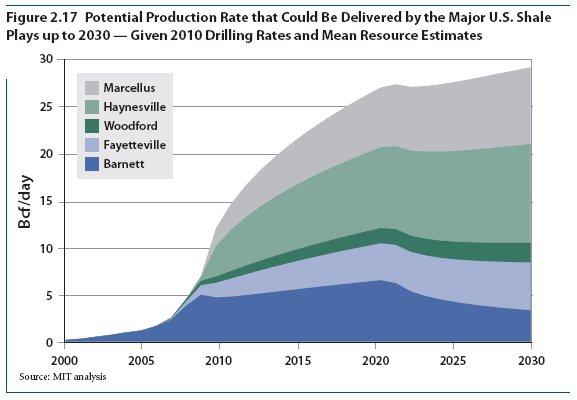 Regarding environmental risks, the report says:

1.  Contamination of groundwater aquifers with drilling fluids or natural gas while drilling and setting casing through the shallow zones.

The report says that this risk should be effectively controlled: “good oilfield practice, governed by existing regulations, should provide an adequate level of protection from these problems.” It recomments that an interstate regulatory review should be done of existing regulations to recommend best practices for regulation of drilling and high-volume hydraulic fracturing.  Note that the report does not recommend federal regulation of hydraulic fracturing under the Clean Water Act.

The report also says that these risks can be managed by state regulations. It recommends complete disclosure of all fracture fluid components and continuation of efforts to eliminate toxic components of fracture fluids.

3.  Contamination as a result of inappropriate off-site wastewater disposal.

The report notes that every year the onshore U.S. industry safely disposes of 18 billion barrels of produced water. “By comparison, a high-volume shale fracturing operation may return around 50 thousand barrels of fracture fluid and formation water to the surface.” It recommends improvements in the recycling of frac water and the development of effective processes to clean up the frac water so that it becomes potable.

4.  Excessive water withdrawals for use in high-volume fracturing.

The report says that, while large quantities of water, typically on the order of 100,000 barrels, are required to frac a well, “the overall impact [on water resources] is small, as can be seen when the volumes are placed in the context of total water usage.” The report then shows the following table, showing that shale development water usage represents less than 1% of total water usage in the affected areas of these shale plays:

The report simply remarks that the large amounts of truck traffic from hauling water for fracking operations “have the potential to be disruptive to local communities in the field development phase of well drilling and completion, particularly in those areas not accustomed to routine oil field operations.”

Note that the risk of contamination of groundwater from hydraulic fracturing is absent from the above list. The report did examine this question and concluded that:

At the end of its environmental section, the report summarizes:

In conclusion, it is clear that oil and gas development is not without risk to the natural environment. State and Federal regulations are designed to mitigate those risks. However, though not the result of risks inherent to the fracturing of shale gas wells, operational errors and poor drilling practice do result in a significant number of incidents. Implementation of the recommendations described above, together with rigorous enforcement of all applicable regulations, should reduce the number of incidents and ensure that shale development can proceed with minimum impact on the environment.

Comforting words for those in the gas exploration business. This report necessarily is looking at the gas exploration industry from the 40,000-foot big-picture perspective, and it cannot address particular concerns in particular regions being developed. For example, the Eagle Ford shale is in West Texas, and in parts of that play groundwater may be scarce and using groundwater for fracking could have a significant impact on groundwater resources. And in Pennsylvania, where infrastructure for underground injection of frac water does not exist, the potential for contamination of surface water resources from returned frac water is greater than in Texas. But, overall, the conclusions of the MIT study appear to me to be reasonable, and make the promise of natural gas as a bridge fuel for the future, with minimal environmental risk, more believable.