A new report on the risks and advantages of hydraulic fracturing by Ann Davis Vaughan and David Pursell, “Frac Attack: Risks, Hype, and Financial Reality of Hydraulic Fracturing in the Shale Plays,” provides a much-needed objective summary and analysis of the recent debate over the safety of hydraulic fracturing. Ann Davis Vaughan founded Reservoir Research Partners and is a former investigative journalist for the Wall Street Journal. David Pursell is an analyst with Tudor Pickering Holt & Co., an investment banking firm in Houston specializing in the energy industry.

The recent debate over the safety of hydraulic fracturing has been frustrating in its lack of objectivity and the availability of reliable data. As the development of shale plays has accelerated, especially in the Marcellus Shale in Pennsylvania and New York, the general impact of oil and gas development on populated areas and areas not accustomed to oil and gas activity has increased. Incidents of accidents involving oilfield contamination have been publicized; documentaries like Gasland have raised the temperature of the debate; Congress has weighed in with proposed federal regulations and new studies; and the industry has fought back with lobbyists, websites and studies of its own. Although the Vaughan/Pursell study will likely be dismissed by the environmental community as another industry effort to minimize the risks of hydraulic fracturing, I found it to be an objective overview by an award-winning investigative reporter who did her homework and sought to objectively evaluate, from a layperson’s perspective, the evidence and literature on the subject. The purpose of the study was evidently to educate investors following the shale plays in the energy industry and help them to evaluate the potential impact of the debate over hydraulic fracturing on the stock prices of companies who have invested heavily in gas shale development. Potential investors in the industry have no agenda except to predict the success of their investments, and so should be looking for objective analyses of the subject.

“Frac Attack” does not provide any new information or data, but is a summary of the available studies and information on hydraulic fracturing; an analysis of the public debate; and a prediction of the potential cost to the industry of increased regulation.  I commend the study for anyone interested in getting a balanced view of the issue. Some highlights from the study:

The authors predict that fracing is unlikely to be banned. “The job losses, higher energy prices and landowner-rights challenges that would result are too unpalatable for Democrats, even those that don’t like the energy business.”

Increased regulation of well completion practices are likely, and additional costs could reach $200,000 to $500,000 per well.

Environmental organizations see opposition to fracing as part of a larger agenda of weaning the country off of fossil fuels. “Widescale adoption of newly abundant, cheap natural gas throws off a mass embrace of renewable energy for a generation.”

Both the environmental lobby and industry are guilty of loading the conversation over fracing with disingenuous arguments. Environmentalists blame fracing for environmental problems not directly tied to the completion technique. “Spills, well blowouts and inadequate treatment of flowback water — none of it fracing per se — have caused trouble for some communities and impacted some water supplies.” Industry “keeps repeating the mantra that ‘not a single case’ has tied hydraulic fracturing to drinkig water contamination.”

Ninety percent of oil and gas wells completed in the US now require use of hydraulic fraturing. The technique allows operators to produce 10 times the amount of energy by drilling fewer than 1/10th the number of wells, thus reducing environmental impacts. Without fracing, gas production would fall significantly, prices for gas would increase, and gas would have to be imported.

The authors’ principal point about the safety of fracing is that “any drilling has the potential to contaminate groundwater if the well is drilled and cemented improperly.” As evidenced by the recent blowout of the BP – Macondo Well, improper cementing of wells is the cause of much of the industry’s enviromental problems. Improper cementing may allow not only frac fluids, but also hydrocarbons and salt water to migrate up the wellbore and contaminate fresh water sands.

The authors say that waste disposal and safe materials handling are the biggest challenges to producers. “Fracing chemicals and drilliing waste are more hazardous above ground than several miles underground.” Above-ground spills pose a more serious environmental hazard than potential contamination of groundwater from fracing.

Fracing has also been criticized as a wasteful use of fresh water resources. The authors conclude that this is a significant issue, but will not be “one of the indusry’s top liabilities.”  Many producers in Pennsylvania have elected to recycle 100% of their produced water. Most shale basins lie in areas with abundant water supplies. And finally, the “water footprint” of fracing is not as large on a relative basis as that for other fuels per unit of energy produced. The table below is from the report, and its source is a report by Chesapeake Energy to the Ground Water Protection Council: 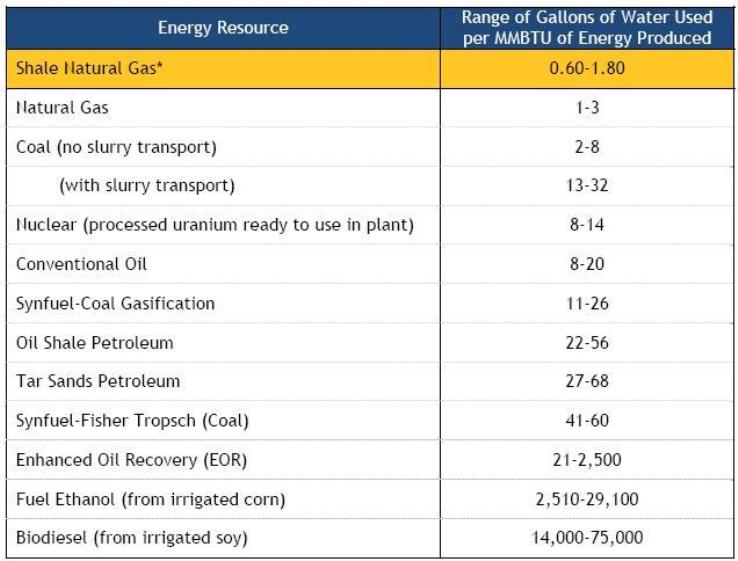 According to Chesapeake, the amount of water it uses in an average frac of a shale well is the same amount consumed by a coal-fired power plant in 12 hours, what New York City consumes in seven minutes, what a golf course uses in 25 days. (This may not be a valid comparison, since these other water uses may not actually “consume” the water permanently, whereas the disposal of spent frac water by injection will permanently place that water beyond human use.)

The authors analyze incidents of contaminaton cited by environmental advocates as evidence of contamination caused by fracing and conclude that most of those incidents are either naturally occurring gas in water sands or problems caused by mistakes in well design — improper cementing — not related to fracing. The report also reviews and summarizes studies that support the safety of fracing and other studies that are used to oppose it. Finally, the report summarizes the proposed legislative and regulatory responses to the debate and predicts their future.

One of the authors’ conclusions summarizes my position in the debate quite well:

“Underground hydraulic fracturing itself hasn’t been proven to contaminate groundwater. However, any time a fresh water aquifer is penetrated (with gas well, water well, or mine shaft) the potential exists to harm aquifers. We believe the conversation will shift away from fracturing to focus on best-practice well design (gas wells and water wells) to address valid landowner concerns.”