In my experience in Texas, the standard practice has been for the oil company to lease the land first, then determine if it is mortgaged, and if so ask the lender to subordinate is lien. Lenders are generally agreeable, believing that, if a well is drilled, the value of their collateral will be enhanced, since they will still have a lien on the royalty interest reserved by their borrower. I recently learned, however, that Fannie Mae is requiring that its borrowers on commercial properties insert specific provisions in the lease before agreeing to the lease, as well as charging a substantial fee. On new leases of residential lots in the Barnett Shale, Chesapeake is sending a lender subordination form to the lot owner along with the lease and asking the owner to get their mortgagee’s consent before paying for the lease.

There are now 1,231 wells producing from the Eagle Ford Shale in South Texas, in 25 counties. Total production to date is more than 37 million barrels of oil/condensate and 311 Bcf of gas. The biggest counties are DeWitt, Karnes, Dimmit, Webb and La Salle.  DeWitt and Karnes Counties are the best oil producers so far. In DeWitt County, 99 Eagle Ford Wells have produced 6.8 million barrels, and the average peak month daily production was 555 barrels. Webb County is tops on Eagle Ford gas production, with 116 Bcf of gas to date, and an average initial production rate in the first month of 3.4 mmcf from 215 wells. As of last month, 238 rigs were running in the Eagle Ford play (compared to 115 in the Marcellus). Drilling in the Barnett Shale play, a gas play, has declined to its lowest level in seven years because of the low price of natural gas. 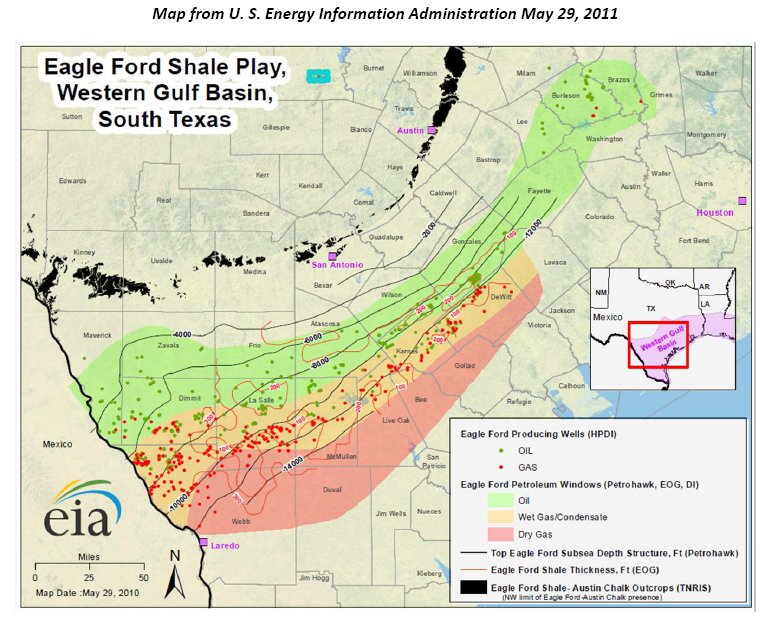 Kinder Morgan’s acquisition will make it the largest operator of gas pipelines in the US and the fourth largest energy firm in North America. Kinder Morgan is reportedly planning to sell El Paso’s exploration and production assets, for as much as $7 billion.

On the local front, in my home town of Austin, the two Brigham brothers have cashed in, selling their company for $4.4 billion to Norway’s Statoil. The Brighams started their company here in Austin several years ago, taking in public, and recently acquired 375,00 acres on the Bakken and Three Forks plays in North Dakota and Montana. Brigham has already been sued by its shareholders, who say that Statoil’s price of $36.50 per share is too low.

A task force appointed by the Commissioner David Porter of the Texas Railroad Commission has adopted “advisements” regarding construction of pipelines and roads in the area of the Eagle Ford Shale play. The task force was appointed in July to “open the lines of communication between all parties, establish best practices for developing the Eagle Ford Shale, and promote economic benefits locally and statewide.”  The task force has twenty members:

The task force adopted the following advisements regarding pipelines and roads.

• Placement of pipelines should avoid steep hillsides and watercourses where feasible.

• When clearing is necessary, the width disturbed should be kept to a minimum and topsoil material should be stockpiled to the side for replacement during reclamation, accelerating successful revegetation.

• Proximity to buildings or other facilities occupied or used by the public should be considered, with particular consideration given to homes.

• Unnecessary damage to trees and other vegetation should be avoided.

• After installation of a new line, all rights-of-way should be restored to conditions compatible with existing land use.

• Trucking companies partnering with the Texas Department of Public Safety to develop a program that would alert companies when their drivers receive moving violations or drivers license suspensions.

• Creation of road use agreements or trucking plans between operators and local authorities, including parameters such as:

The task force is supposed to meet monthly.