The last few years have seen a boom in the oil and gas exploration business in the U.S., driven by new technologies that have allowed exploitation of “unconventional” resources for gas and oil.  These resources are often called “resource” plays, because the oil and gas is being produced from shale beds. Shale is known by geologists to be the source or “resource” of pockets of oil and gas accumulated over hundreds of years in more conventional oil and gas sands, trapped by faults and other geological anomalies.

The resource plays in the news over the last couple of years are the Barnett Shale in Texas, in and around Fort Worth, the Fayetteville Shale in Arkansas, the Bakken Shale in North Dakota, and more recently the Marcellus Shale in Pennsylvania and New York, the Haynesville Shale in Louisiana and East Texas, and the recently discovered Eagle Ford Shale in South Texas.  Exploitation of these resources has resulted from two factors:  improved technology, especially horizontal drilling, and high oil and gas prices.  The discovery and exploitation of these shale plays has dramatically increased the U.S. reserves of natural gas.  The top producing well in the Haynesville Shale produced 713 million cubic feet of gas in December, an average of 23 mmcf per day.

The table below shows the increase in production from the Barnett Shale since 1982: 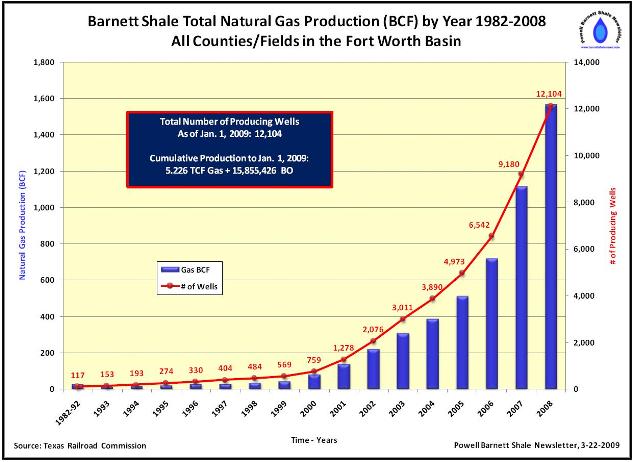 These shale plays have had dramatic effects in the U.S. economy and in U.S., state and local politics.  For example:

— The Haynesville Shale is 200-300 feet thick.  Recoverable gas reserves are estimated at 24-60 Bcf (billion cubic fee, or a million mcf) per square mile.  Estimated ultimate recoveries from Haynesville wells have been estimated at 4.5 to 8.5 Bcf per well.

— In and around Fort Worth, and in areas of Pennsylvania, landowners began to organize themselves to bargain with exploration companies as a group, to increase their leverage to obtain better lease terms.

— Horizontal drilling technology has allowed the drilling of wells in urban areas, including under the DFW Airport and under the campus of Texas Christian University in Fort Worth.

— Urban drilling has also lead to increased regulation by municipalities of drilling activities in urban areas.  Fort Worth and surrounding cities have adopted increasingly sophisticated and complex drilling ordinances, regulating aspects of drilling and producing wells that have not heretofore been the subject of regulation, including sound abatement, air pollution, pipeline safety, and street maintenance.

— Members of the Texas Legislature, now in session, have introduced numerous bills – principally in response to complaints by constituents – to allow municipalities, counties and groundwater districts some authority to regulate condemnation for and location of pipelines, underground disposal of produced water and frac water, and “the quality of the environment.”  Industry lobbyists are being kept busy opposing those bills.

— The Pennsylvania Legislature is considering bills to impose a property tax on producing minerals and a severance tax on production in that state.