Sent to me by a friend:

Edgar Freeman Smith was the youngest child of a circuit preacher. By age eleven he had to work in a coal mine to support his widowed mother. When he was eighteen they lost their home to foreclosure. People told him to learn a trade if he wanted to get by. Edgar’s ears were plugged to that. All he ever wanted to be was a lawyer.

He sweated all day and studied into the night. This was back when you could read for the law. After six years of reading, Edgar took the bar exam. He passed. Edgar Freeman Smith was a lawyer.

Big cases were finding their way to the land desk then – cases that would change the entire legal landscape. It was Edgar’s job to argue for the State of Texas. His opponents were men of immense learning with formidable minds. His weapon: exhausting preparation.

A Saga of Texas Land and Oil Law is Edgar Smith’s legal autobiography, written in 1940. Inside he lays out the the facts of the cases he argued and why he won, while presenting the arguments of his opponents in a fair light.

The cases he covers include:

Edgar Smith went on to work for Baker, Botts, Parker & Garwood (now Baker Botts) and his book includes a concise history of the firm, as well as an excellent character sketch of Judge Garwood.

He also details his involvement in:

Frank Dobie thought enough of Edgar’s book to include it in his Guide to Life and Literature of the Southwest, a sort of master reading list if you want a solid grounding in the culture and history of our region.

When Judge Garwood left Baker Botts to form his own practice in Austin, he wrote this dedication to Smith:

In memory of well fought fields;
to have lost without dejection; to have won without elation;
to have fought for love of truth that justice might prevail,
without thought of consequence to self
– what greater life can the world afford? 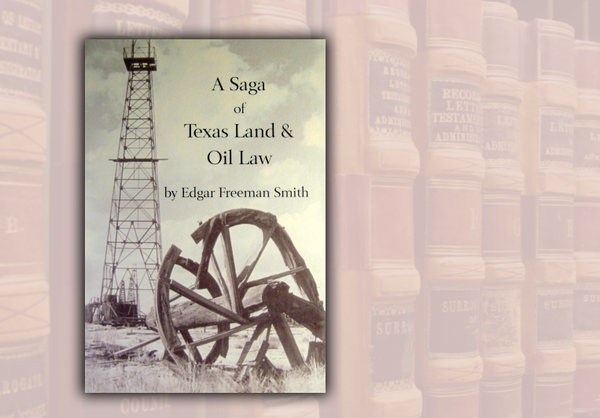 You can order the book here.

Smith’s remains can be found in San Angelo. He and his wife Bessie were married for 59 years.