In a recent Wall Stree Journal article, “America’s Natural Gas Revolution,” Daniel Yergin and Robert Ineson opine that gas produced from shale “is already changing the national energy dialogue and overall energy outlook in the U.S.–and could change the global natural gas balance.” Mr. Yergin is the author of “The Prize: the Epic Quest for Oil, Money, & Power” which won him a Pulitzer Prize.  He is now chairman of IHS CERA.  Mr. Ineson is senior director of global gas for IHS CERA.

Yergin and Ineson cite the following evidence for their thesis:

— Production of gas in the lower 48 states increased 15% from the beginning of 2007 to mid-2008 – an increase fueld mostly by shale gas discoveries, and an increase that is more than most other countries’ total gas production.

— “At current levels of demand, the U.S. has about 90 years of proven and potential supply — a number that is bound to go up as more and more shale gas is found.”

Most of this new gas comes from shale plays, beginning with the Barnett Shale in North Texas, and including the Haynesville (Louisiana and Texas), Fayetteville (Arkansas), Marcellus (Pennsylvania and New York), and most recently the Eagle Ford in South Texas. Shale gas is made possible by use of horizontal drilling technology and newly developed hydraulic fracturing completion techniques.

The authors believe that this new gas supply will dramatically impact the way the U.S. generates electricity. The U.S. now largely relies on coal for electric generation. New climate regulations and gas’s increased availability will increase the use of gas in electric generation. Gas is cleaner and emits less carbon dioxide, and gas-fired power plants can be built more quickly and more cheaply than coal-fired plants. As more jurisdictions mandate higher percentages of generation from wind and solar, which are intermittent and unreliable, gas plants may be built to provide the base load needed to make up the difference.

Natural gas may also become the fuel of choice for truck fleets and busses, and eventually passenger vehicles.

The International Energy Agency recently published its World Energy Output 2009, and in it comments on its prediction of the future of natural gas in world energy consumption, and the effect of the new shale gas discoveries.  IEA issues two future scenarios: what will happen if significant efforts are not made to reduce hydrocarbon use for energy generation and the resulting greenhouse gas emissions – its “Reference Scenario;” and what will be necessary to reduce CO2 levels in the atmosphere to 450 parts per million – its “450 Scenario.” Even in the 450 Secenario, IEA predicts that world gas demand will grow by 17% by 2030. Under the Reference Scenario, gas demand grows by 34%. Among IEA’s findings:

— “Proven gas reserves at the end of 2008 totalled more than 180 tcm globally — equal to about 60 years of production at current rates.”

— Over half of global gas reserves are located in three countries:  Russia, Iran and Qatar.

— The global recoverable gas reserve base is estimated at more than 850 trillion cubic meters.  Unconventional gas resources, mainly coalbed methane, tight gas and shale gas, make up about 45% of that total.

— “Close to half of the world’s existing production capacity will need to be replaced by 2030 as a result of depletion.  This is the equivalent of twice current Russian production.”

IEA says that the development of shale gas in the U.S. in the last three years “changes the game in North America and elsewhere.” The additional supply has led to a steep drop in US gas prices and cut liquefied natural gas (LNG) import needs and put downward pressure on prices in other regions. “Our analysis shows that new unconventional sources of supply have the potential to increase overall North American production at wellhead cost of between $3/MBtu and $5/MBtu … for the coming several decades ….” As a result, “a glut of gas is looming.” Low gas prices are expected to discourage imports of LNG into the US. Increased use of natural gas as a power generation fuel may boost demand.  “[N]ew gas-fired capacity could be brought on stream within three to four years and reduce the overhang in supply capacity in the medium term.” 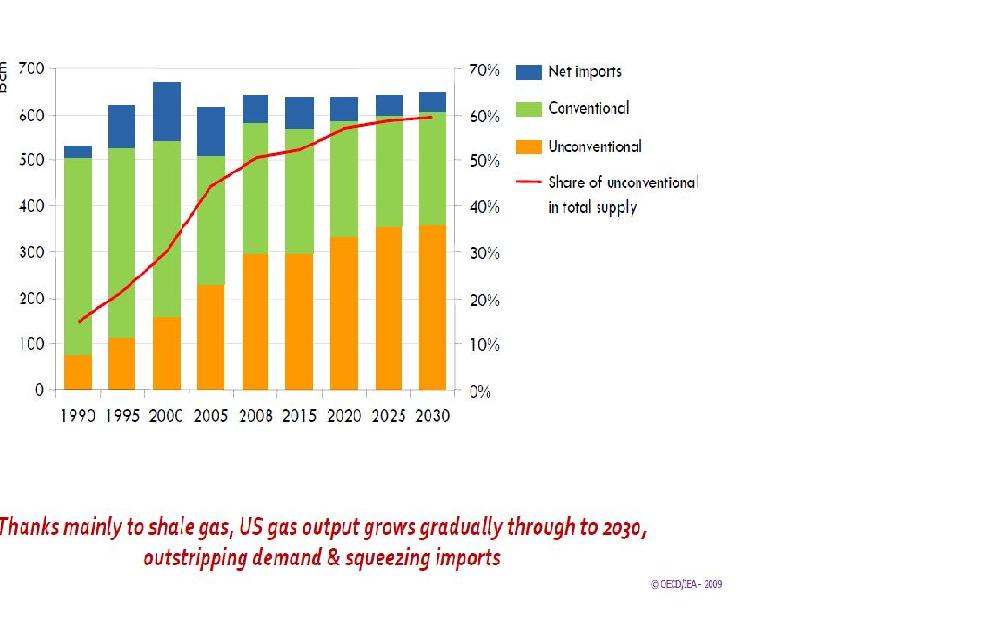 So, suddenly the U.S. is awash in natural gas. This increased supply, combined with the recent recession, has driven the price of gas down significantly. Congress appears to be pushing for increased use of natural gas as fuel, consistent with its goal of reducing global warming. It remains to be seen whether the market will trust the long-term supply of gas as fuel and invest in its use.