Beginning in 2013, the town of Azle, in the heart of the Barnett Shale, experienced a “swarm” of earthquakes. Its citizens complained to the Texas Railroad Commission, blaming injection wells for the quakes. When the RRC held a meeting in Azle, refusing to link the quakes to the injection wells, the citizens decided to protest in Austin. They bussed themselves to a RRC open meeting, where they serenaded the commissioners with a song from Elvis, “All Shook Up.”

Southern Methodist University scientists have now published a paper concluding that the Azle quakes were “most likely” caused by the injection wells, together with withdrawals of produced water by the seventy-plus producing wells in the area. SMU installed monitors around Azle after the quakes began,and identified a fault running through the area. The scientists developed a model showing that the changes in pressure caused by the withdrawals on one side of the fault and the injections on the other were the likely cause of the quakes. Heather DeShon, one of the SMU researchers, said that “What we refer to as induced seismicity – earthquakes caused by something other than strictly natural forces – is often associated with subsurface pressure changes. We can rule out stress changes induced by local water table changes. While some uncertainties remain, it is unlikely that natural increases to tectonic stresses led to these events.” 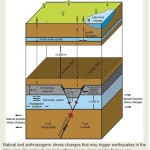 The Texas Railroad Commission website stills says that  “Texas has a long history of safe injection, and staff has not identified a significant correlation between faulting and injection practices.” After Azle’s visit to the RRC, it hired its own seismologist, David Pearson. In response to the SMU report,  Pearson said that “We will not be suspending activity at the two wells, especially given the fact that we have not seen any continuation of large-scale earthquakes in the Azle area that would give us any cause for alarm. The swarm has died out and has been quiet for some time.” Milton Rister, the Railroad Commission’s executive director, wrote a letter requesting a meeting with the SMU researchers.

The earliest quakes blamed on oil and gas activity occurred in 2008 around the Dallas-Fort Worth Airport. More recently there has been a swarm of quakes in the Dallas area.

The SMU study can be found here.