Austin Energy, the City of Austin’s municipally owned electric utility, recently announced a deal with Recurrent Energy to buy up to 150 megawatts of electricity from a solar farm to be constructed by Recurrent in West Texas, at 5 cents per kilowatt hour, guaranteed for 20 years.  Austin Energy is the nation’s 8th-largest municipal utility. As reported in the Austin Chronicle, the deal means that Austin Energy could reach its goal of 200 megawatts of solar power by 2020 well ahead of schedule. Austin Energy has its own solar farm in Webberville that can generate up to 30 megawatts. Austin Energy’s current plans provide for increased reliance on renewable energy sources: 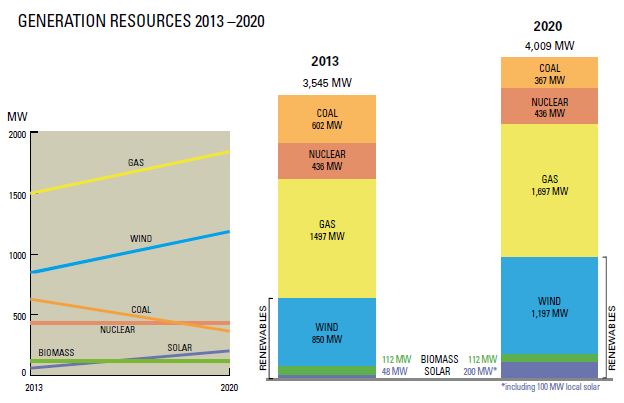 The cost of solar electricity has now become competitive with other fuels — although still with support from tax credits.  Austin Energy’s estimate of its fuel costs:

Solar beats nuclear, coal and natural gas, even at the presently low cost of natural gas.

If Austin Energy gets 250 megawatts of solar on line, it will constitute about 10% of its total capacity. Two hundred fifty megawatts can supply electricity for about 125,000 Austin residences under normal conditions.

Austin Energy also has contracts for 850 megawatts of electricity from wind.

The availability of wind and solar power to Austin was largely made possible by the state’s CREZ project, the construction of transmission lines from West Texas over the last several years to make wind and solar resources, abundant in West Texas, available to the urbanized areas around Dallas, San Antonio, Austin and Houston. At a cost of $5 billion, the CREZ lines will eventually transmit more than 18,000 megawatts of power from West Texas and the Panhandle to metropolitan areas of the state.