I recently came across a study just published by a group of sociology professors testing our ability to make decisions based on facts. It takes a little explanation, but it is worth looking at. The question they asked:  Why does public conflict over societal risks persist in the face of compellng and widely accessible scientific evidence? To find out, the professors asked 1,111 participants a series of questions designed to gauge their political views, and then they were asked to solve a word math problem. Half of the participants were given the following problem: 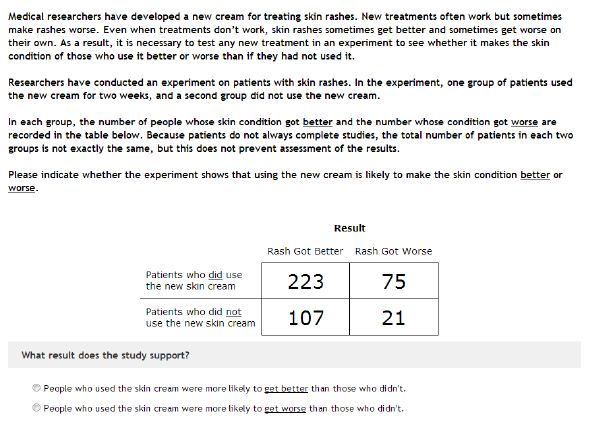 The correct answer?  Patients who used the skin cream were more likely to get worse than those who didn’t.  Roughly 1 in 3 patients who used the skin cream got worse, but roughly 1 in 5 of those who didn’t use the skin cream got worse. Solving the problem requires skill in “numeracy”, basically the ability to solve math problems. (For the study, the data were reversed for half of the participants and presented so that they suggested that the skin cream did work.)  59% of those in the study got the answer wrong. The more “numerate” the study participants were, the more likely they were to get the problem right. That was true whether the participants were liberal Democrats or conservative Republicans.

The other half of the participants were given a different problem:  they were asked to determine the effectivenes of laws “banning private citizens from carrying concealed handguns in public.” Participants were given data about cities that had or had not passed concealed carry bans, and where crime in these cities had or had not decreased. The numbers used in this problem were exactly the same as those in the skin-rash problem. The results are shown below:

Even though the numbers in both problems were exactly the same, the answers of participants were quite different. This time, the political leanings of the participants had a significant impact on their responses. Liberal Democrats did much better on the gun problem when the right answer was that crime decreases with gun control; conservative Republicans did much better when the right answer was that crime does not decrease with gun control. Here are the results shown graphically: 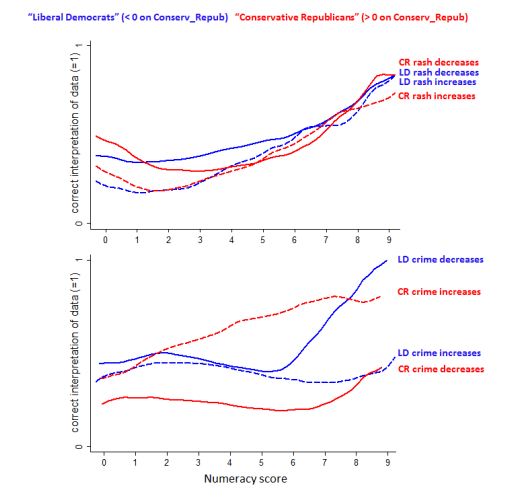 In other words, more knowledge (numeracy) does not increase people’s ability to reason when it comes to politically charged issues like gun control. People let their biases get in the way.

Here are two good articles on the problem of rational decision-making, commenting on the study:

So what does this have to do with oil and gas? It reminds me of the debate over hydraulic fracturing. It appears that the more those in favor of fracing are presented with facts showing its dangers, the more they deny those facts and argue it is safe; and the more those opposed to fracing are presented with facts showing its benefits, the more they argue in opposition. The same could be said of global warming, the Affordable Care Act, the presence of weapons of mass destruction in Iraq, abortion rights, gay marriage, evolution, etc.

Leon Festinger, a famous Stanford University psychologist, said that “A man with a conviction is a hard man to change. Tell him you disagree and he turns away. Show him facts or figures and he questions your sources. Appeal to logic and he fails to see your point.”  Changing one’s point of view on difficult politically charged issues is difficult.