The Oklahoma Corporation Commission and the Environmental Protection Agency have ordered the shut-in of 54 disposal wells in Osage County, Oklahoma, after a magnitude 5.6 earthquake on Saturday, September 3. The wells are in an oval with a 10-mile radius around the center of the quake, a 211-mile area (click to enlarge): 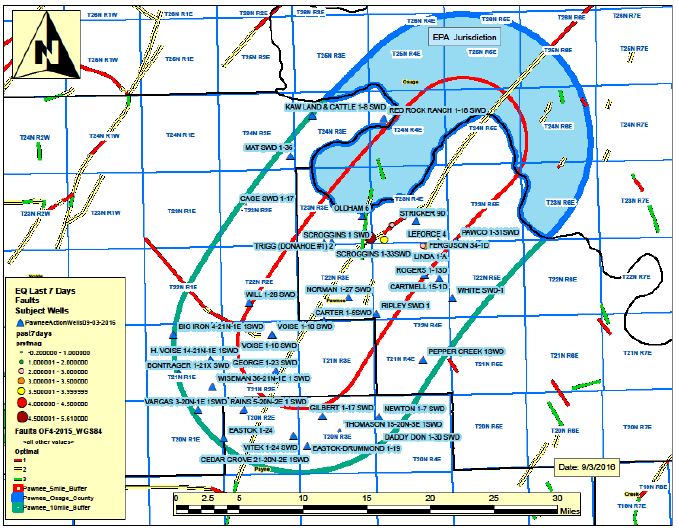 The EPA ordered 17 wells shut-in in the blue area above because EPA is responsible for regulation of oil and gas operations in the Pawnee Nation reservation area.

The quake was about the same magnitude as one near Prague, Oklahoma in 2011 that was the largest recorded quake in Oklahoma.

Oklahoma is now the most seismically active state in the country, recording more than 905 quakes greater than magnitude 3 in 2015. California had 535 such quakes in 2015. Magnitude 3 is the size at which most quakes can be felt at the surface. A magnitude 5.6 quake is nearly 400 times larger and 8,000 times stronger than a magnitude 3.

The September 3 quake was felt from Illinois to Texas. In Nebraska, it was cited as the cause of an “unusual event” at the cooper Nuclear Station. One homeowner in Pawnee suffered minor injuries and three homes were damaged. Governor Mary Fallin declared a state of emergency.

Pawnee County has not previously been the center of quake activity, but a large fault crosses through the county. Scientists have linked water injection from oil and gas operations to quakes in Oklahoma and Texas. Recently, EPA chided the Texas Railroad Commission for their reluctance to link quakes to disposal wells.