END_OF_DOCUMENT_TOKEN_TO_BE_REPLACED

UT’s Bureau of Economic Geology has installed monitoring stations to record earthquakes across oil and gas fields in Texas, following the Legislature’s appropriation of funds for that purpose. It has been up and running since 1/1/17. Remember there was a big debate about whether oil and gas activities have resulted in earthquake activity. TexNet’s website has an interactive map that shows quakes of various magnitudes since that date. Snapshot below. You can see that quakes are centered in the active areas around the Permian, the Eagle Ford and the Barnett. Colors depict different magnitudes. 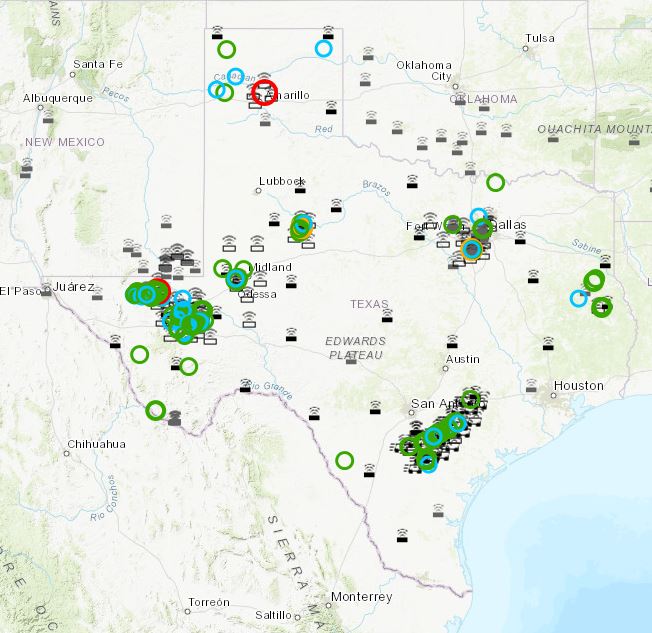 A study released by TexNet concludes that “some earthquakes in west Texas are more likely due to hydraulic-fracturing than salt-water disposal.” 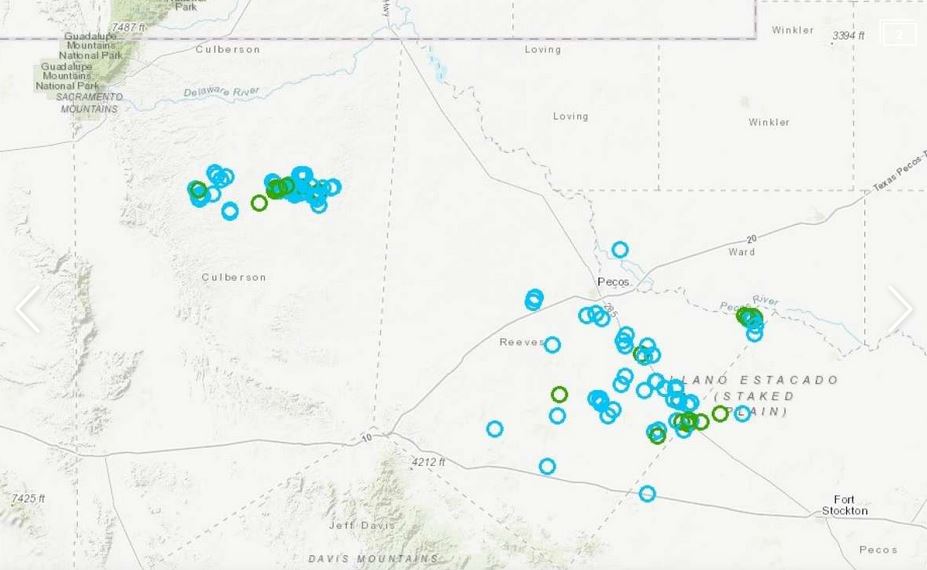 TexNet is a seismic monitoring program run by the University of Texas and funded by the legislature as a result of unusual earthquake activity in several areas of Texas where oil and gas drilling has spiked in the last few years. Previous studies had linked earthquakes to saltwater injection, resulting in increased regulation of water injection wells by the Texas Railroad Commission.

This year TexNet has detected 209 earthquakes across Texas, with the strongest at 3.8 magnitude, near Snyder on October 1, already surpassing the total quakes in 2018 of 192.

Beginning in 2015, earthquakes in Oklahoma began to be linked with increased injections of water produced from oil and gas wells. State regulatory authorities were slow to react. Operators of large injection wells like Harold Hamm and his Continental Resources pushed back, pressuring the University of Oklahoma to dismiss scientists who were studying links between disposal wells and earthquakes. But the State eventually began monitoring seismic events in earnest, and the Oklahoma Corporation Commission began to order the shut-down of injection wells.  In September 2016 the Commission and the EPA ordered 54 disposal wells in Osage County shut in after a magnitude 5.6 quake on September 3. See Oklahoma’s interactive map displaying seismic events, here. The image below shows the number and intensity of earthquakes north of Oklahoma City in 2015: 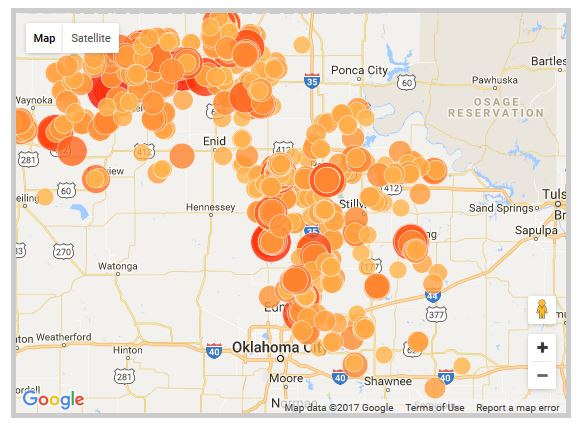 Below are the quakes to date in the same area in 2017: END_OF_DOCUMENT_TOKEN_TO_BE_REPLACED

The Dallas Morning News has published an excellent, in-depth investigative report — “Seismic Denial? Why Texas Won’t Admit Fracking Wastewater is Causing Earthquakes,” by Steve Thompson and Anna Kuchment — about the Texas Railroad Commission’s failure to recognize or address the relationship between salt water disposal wells and earthquakes in North Texas, and the industry’s influence on the process. Anyone who wants to know how the Railroad Commission really works should read this article.  In an accompanying editorial, the News said:

The editorial remarks on the substantial campaign contributions received by commissioners, all of whom are elected, from exploration companies. The Commission is under sunset review (again) this session and must be re-authorized by the Legislature next year. The editorial continues:

END_OF_DOCUMENT_TOKEN_TO_BE_REPLACED

National press have reported that oil tycoon Harold Hamm, billionaire founder and CEO of Continental Resources, is being considered for Energy Secretary in the Trump administration. Last year, it was reported that Hamm pressured the University of Oklahoma to dismiss scientists who were studying links between disposal wells and earthquakes in Oklahoma. (Google Harold Hamm and earthquakes.)  Since that time, the Oklahoma Corporation Commission has been forced to order severe curtailment of salt water disposal to lessen incidence of earthquakes. Most recently, a 5.0 quake hit near Cushing, OK, the site of the largest oil and gas storage facility in the U.S., forcing shutdown of some pipelines and causing significant property damage in the town of Cushing. 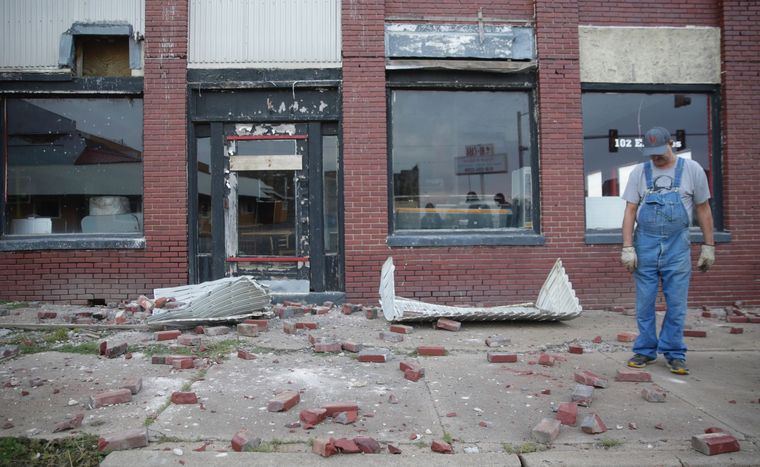 The Oklahoma Corporation Commission and the Environmental Protection Agency have ordered the shut-in of 54 disposal wells in Osage County, Oklahoma, after a magnitude 5.6 earthquake on Saturday, September 3. The wells are in an oval with a 10-mile radius around the center of the quake, a 211-mile area (click to enlarge):

The EPA ordered 17 wells shut-in in the blue area above because EPA is responsible for regulation of oil and gas operations in the Pawnee Nation reservation area.

The quake was about the same magnitude as one near Prague, Oklahoma in 2011 that was the largest recorded quake in Oklahoma.

END_OF_DOCUMENT_TOKEN_TO_BE_REPLACED

Anna Kuchment does an excellent job of summarizing the different regulatory reactions to increased earthquake activity across the country triggered by huge increases in wastewater injection, in “Drilling for Earthquakes.”

Last year the Texas legislature passed House Bill 2, including a supplemental appropriation of $4.5 million to fund a study of the causes of earthquakes in the Dallas-Fort Worth area. The funds are being used to purchase and run seismic monitoring equipment and analysis of data to test the connection between oil and gas activity in the area and recent seismic activity. The legislation also required the governor to name a technical advisory committee to advise on the project, which is led by the University of Texas Bureau of Economic Geology. Yesterday, the governor named the members of the advisory committee:

END_OF_DOCUMENT_TOKEN_TO_BE_REPLACED

On Saturday, Oklahoma experienced the third-largest earthquake on record in the state, a 5.1-magnitude quake in northwest Oklahoma. It was felt across Arkansas, Iowa, Kansas, Missouri, Nebraska, New Mexico and Texas, and was followed by 10 smaller quakes ranging from 2.5 to 3.9. In response, the Oklahoma Corporation Commission announced that it would implement a regional plan to address earthquakes in the state, which are linked to the large increase in disposal of produced water. A spokesman for the Commission said that “the plan will involve a large-scale regional reduction in oil and gas wastewater disposal for an approximately 5,000 square mile area in western Oklahoma.” The plan is to be released today. A big loser in the Commission’s plan will likely be Sandridge Energy, a company that has invested heavily in production activities that require disposal of huge volumes of produced water in Oklahoma.

Earthquakes have also been linked to wastewater disposal operations in North Texas, and the Texas legislature last year funded a study now being conducted under the supervision of the University of Texas Bureau of Economic Geology to investigate the causal link between increased seismic activity and wastewater disposal in North Texas. Although the Texas Railroad Commission hired its own seismologist last year, the RRC has so far refused to admit any connection between quakes and disposal operations in Texas. After a study led by scientists at Southern Methodist University linked quakes near Azle, Texas to two disposal wells nearby, the RRC called two “show cause” hearings to require the companies operating those wells to show cause why their disposal operations should not be halted or curtailed; after those hearings, the RRC held that the companies had proven that there was no causal link between the disposal wells and the earthquakes, despite the SMU study.

At a recent forum of Republican candidates for the open RRC seat, no candidate was willing to admit any causal link between recent quakes in the DFW region and increased wastewater disposal activities in that area.