Oklahoma oil and gas regulators are scrambling to deal with increasing seismic activity. The Oklahoma Corporation Commission ordered six wastewater disposal wells shut down after the state’s strongest earthquake since 2011, a magnitude-4.7 quake near Cherokee, close to the Kansas border. The quake was felt from Dallas to Kansas City. A second 4.0- quake was centered near Crescent, close to Oklahoma City. There were a total of eight earthquakes. The Commission also ordered the owners of 23 other wells to reduce injection rates by 25 to 50 percent.

Oklahoma regulators have now conceded that earthquakes there are caused by disposal wells, after much earlier debate. Oklahoma is now the most seismically active area of the country. The state has had more than 790 quakes of magnitude 3 or greater this year, compared to 585 last year.

Cherokee is in Alfalfa County, where 225 million barrels of waste water was disposed of last year, more than 10 times what was injected in 2010. It sits over the Mississippi Lime, an oil play that requires disposal of 10 barrels of water for every barrel of oil produced.

END_OF_DOCUMENT_TOKEN_TO_BE_REPLACED

Recent earthquakes near Cushing, Oklahoma have caused a seismic shift in the state’s response to induced quakes in that state. The reason – Cushing is a major hub in the U.S. for storage and shipments of crude. Below is a snapshot of some of the giant storage tanks just outside the town (click to enlarge): 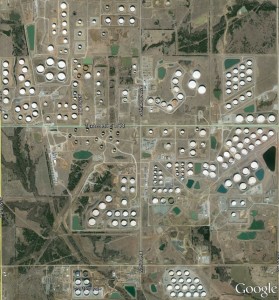 Some of these tanks are large enough to hold a Boeing 747. Cushing’s storage can hold more than 10 million barrels of oil; it is the largest commercial storage depot in the U.S.

A flurry of quakes have recently hit near Cushing. On October 10, a quake measuring 4.5 on the Richter scale hit about three miles from the town.  Scientists have linked increased seismic activity in Oklahoma to increased waste water injection.  3.3 billion barrels of waste water were injected under Oklahoma from 2011 through 2013.

END_OF_DOCUMENT_TOKEN_TO_BE_REPLACED

The Oklahoma Corporation Commission, the regulator of oil and gas in Oklahoma, has directed operators of 23 injection wells in a designated area to reduce rates of injection by 38% by October 2, 2015. The order covers a 15-mile-by-40-mile “area of interest,” stretching northwest from the outskirts of Oklahoma City. The Commission’s letter may be viewed here: Oklahoma Corp Commn quake letter

Dana Murphy, one of the three elected members of the Corporation Commission, said “This is an issue completely outside the scope of the experience of not only this agency, but all our partner agencies and stakeholders, as well. There was a time when the scientific, legal, policy and other concerns related to this issue had to first be carefully researched and debated in order to provide a valid framework for such action. That time is over.”

END_OF_DOCUMENT_TOKEN_TO_BE_REPLACED

Energywire has been following the political implications of the University of Oklahoma’s study of the causes behind the huge increase in earthquakes in Oklahoma, and OU’s relationship with Harold Hamm, CEO of Continental Resources. In a recent investigative article, Energywire reported that “University of Oklahoma officials were seeking a $25 million donation from billionaire oilman Harold Hamm last year, records show, at a time when scientists at the school were formulating the state’s position on oil drilling and earthquakes.” OU initially “came up with a position that squared with Hamm’s, saying most of the hundreds of earthquakes rattling the state are natural and not caused by the oil industry.” Hamm turned down the donation request, and OU’s Geological Survey subsequently changed its position and now says that most earthquakes in Oklahoma are “very likely” triggered by oil and gas activities.

OU’s president, David Boren, a former senator, serves with Hamm on Continental’s board of directors and according to Energywire has received $1.6 million from the company since 2009. Hamm has pressured OU to avoid linking quakes to injection of produced water in Oklahoma.

END_OF_DOCUMENT_TOKEN_TO_BE_REPLACED

Yesterday the Texas Railroad Commission held the first of two scheduled show cause hearings called by the RRC to determine whether two salt water disposal wells near Azle, Texas should be shut down because they caused earthquakes in the area. The earthquakes in that region of Parker County are the subject of a recently published study by scientists at Southern Methodist University, which concluded that the quakes were probably caused by the injection wells. One of the wells is owned by XTO Energy, the other by Enervest. Enervest’s show cause hearing is scheduled for next week.

The XTO hearing was before two hearings examiners, Marshall Enquist and Paul Dubois. Hearings examiners act as administrative law judges in RRC hearings; they then propose a decision to the three commissioners, who can either accept or reject their proposed decision.

Only XTO appeared at the hearing, represented by their attorney Tim George, who called three witnesses and introduced more than 30 exhibits. XTO argued that the earthquakes were natural phenomena not caused by their injection activities. No witnesses appeared to oppose XTO’s position. A staff attorney at the RRC did ask some questions of XTO’s witnesses and offered the SMU study as evidence, over XTO’s objection. Tim George argued that the study was hearsay and that the scientists were not available to be cross-examined on the study. Marshall Enquist admitted the study as evidence over George’s objection, saying “in a way, [the SMU study] is why we’re here today.”

END_OF_DOCUMENT_TOKEN_TO_BE_REPLACED

The Texas Legislature has passed a supplemental appropriation of $4.471 million to fund a study of the cause of recent earthquakes in the Dallas-Fort Worth area. The money will be used to fund the purchase and use of seismic monitoring equipment and modeling of reservoir behavior, testing any connection between oil and gas activity and the recent swarms of quakes in the region.

The Bureau of Economic Geology at the University of Texas will lead the study in collaboration with other Texas universities, including the Texas A&M Engineering Experiment Station. The legislation requires formation of a nine-member technical advisory committee to direct the study. Members of the committee must include two members from universities who have seismic or reservoir expertise, to experts from the oil and gas industry, and the Texas Railroad Commission seismologist, Craig Pearson. A report must be provided to the Legislature by December 2016.

It is notable that the Legislature chose not to entrust the study to the Texas Railroad Commission, even though industry representatives favored that position. The Commission’s three elected commissioners rely heavily on contributions from the industry to fund their campaigns, and until the recent seismic activity in the DFW region, the commissioners refused to recognize the connection between earthquakes and oil and gas production in the Azle area of the Barnett Shale. Last month, a team of scientists published a paper concluding that the Azle seismic activity was more than likely linked to salt water injection wells in the vicinity. Those scientists testified before a legislative committee about their findings.

END_OF_DOCUMENT_TOKEN_TO_BE_REPLACED

Oklahoma regulators have finally awakened to the seismic activity caused by water well injection in their state. Take a look a this new website unveiled this week by the Oklahoma Corporation Commission.  And look at their interactive map showing seismic events and injection wells. Oklahoma now surpasses California in seismic activity. Railroad Commission, where are you? Don’t let the Sooners show you up.