On Saturday, Oklahoma experienced the third-largest earthquake on record in the state, a 5.1-magnitude quake in northwest Oklahoma. It was felt across Arkansas, Iowa, Kansas, Missouri, Nebraska, New Mexico and Texas, and was followed by 10 smaller quakes ranging from 2.5 to 3.9. In response, the Oklahoma Corporation Commission announced that it would implement a regional plan to address earthquakes in the state, which are linked to the large increase in disposal of produced water. A spokesman for the Commission said that “the plan will involve a large-scale regional reduction in oil and gas wastewater disposal for an approximately 5,000 square mile area in western Oklahoma.” The plan is to be released today. A big loser in the Commission’s plan will likely be Sandridge Energy, a company that has invested heavily in production activities that require disposal of huge volumes of produced water in Oklahoma.

Earthquakes have also been linked to wastewater disposal operations in North Texas, and the Texas legislature last year funded a study now being conducted under the supervision of the University of Texas Bureau of Economic Geology to investigate the causal link between increased seismic activity and wastewater disposal in North Texas. Although the Texas Railroad Commission hired its own seismologist last year, the RRC has so far refused to admit any connection between quakes and disposal operations in Texas. After a study led by scientists at Southern Methodist University linked quakes near Azle, Texas to two disposal wells nearby, the RRC called two “show cause” hearings to require the companies operating those wells to show cause why their disposal operations should not be halted or curtailed; after those hearings, the RRC held that the companies had proven that there was no causal link between the disposal wells and the earthquakes, despite the SMU study.

At a recent forum of Republican candidates for the open RRC seat, no candidate was willing to admit any causal link between recent quakes in the DFW region and increased wastewater disposal activities in that area.

The reticence of Texas regulators to impose any restrictions on disposal activities linked to quakes in Texas mirrors similar reticence in Oklahoma, before the number of quakes increased so dramatically as to require a response. Initially, the Oklahoma Corporation Commission was reluctant to recognize a link between quakes and water disposal. It has been reported that Harold Hamm, CEO of Continental Resources, pressured the University of Oklahoma to deny any link. Oklahoma has now changed its tune. See the Corporation Commission’s website, earthquakes.ok.gov. “Seismologists have documented the relationship between wastewater disposal and triggered seismic activity. The Oklahoma Geological Survey has determined that the majority of recent earthquakes in central and north-central Oklahoma are very likely triggered by the injection of produced water in disposal wells.” The website has its own map of quake sites in Oklahoma. Here is the map for quakes that have occurred since the beginning of this year: 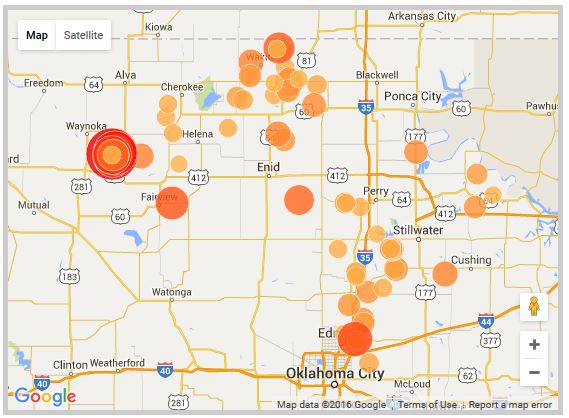