Two studies by University of Texas’ Jackson School of Geosciences analyzed data on water use in eight major US shale plays from 2009 to 2017. The first study, published in Environmental Science and Technology, quantifies how much water is produced from wells and how much is need for hydraulic fracturing. The second, published in Science of the total Environment, assesses the potential for using produced water in other sectors, including agriculture. UT’s announcement and summary of the studies can be found here. The announcement includes this:

Oil plays produced much more water than natural gas plays, with the Permian Basin producing about 50 times as much water as the Marcellus in 2017. As far as recycling potential for hydraulic fracturing, the research shows that in many cases there’s plenty of water that could be put to good use. For instance, in the Delaware Basin, which is part of the larger Permian Basin in Texas, scientists found that projected produced water volumes will be almost four times as great as the amount of water required for hydraulic fracturing.

Managing this produced water will pose a significant challenge in the Delaware, which accounts for about 50% of the country’s projected oil production. Although the water could theoretically be used by other sectors, such as agriculture in arid West Texas, scientists said water quality issues and the cost to treat the briny water could be hurdles. In addition, if the water is highly treated to remove all the solids, large volumes of salt would be generated. The salt from the produced water in the Delaware Basin in 2017 alone could fill up to 3,000 Olympic swimming pools.

“The ability to beneficially reuse produced waters in arid and semi-arid regions, which can be water stressed, is not the panacea that we were hoping,” said co-author Mark Engle, a professor at The University of Texas at El Paso. “There is definitely potential to do some good, but it will require cautious and smart approaches and policies.”

One graphic from the studies illustrates frac water use, produced water, and water used for irrigation in each of the producing areas: 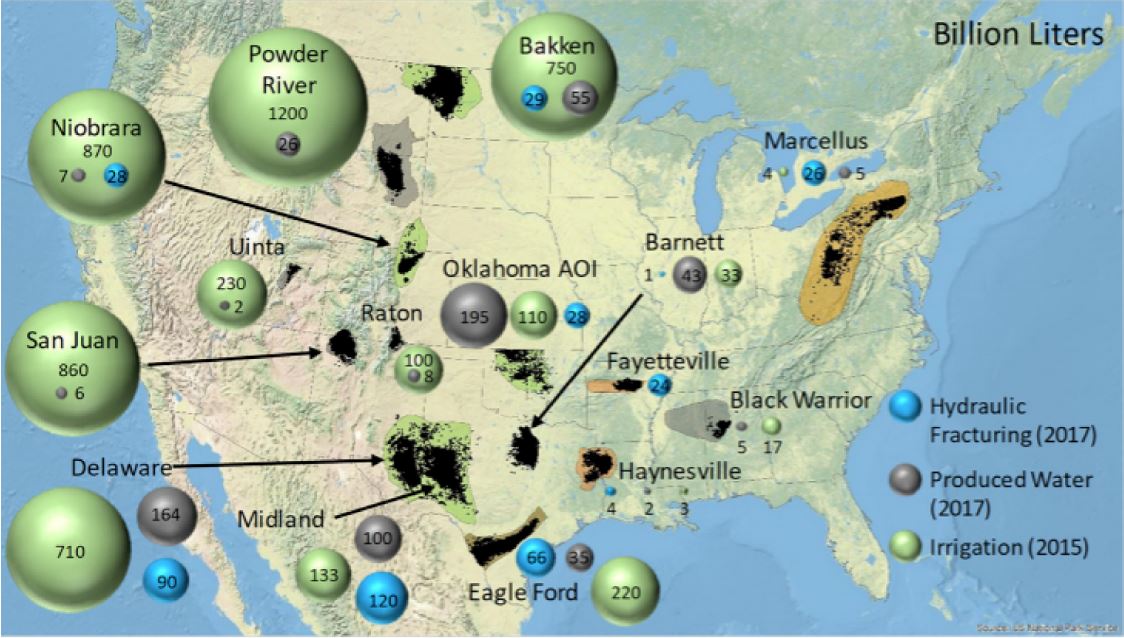