Last month the El Paso Court of Appeals issued its opinion in a long-running dispute over royalties on a section of land in Upton County. Davis et al. v. COG Operating, LLC, et al., No. 08-20-00205-CV. The court addressed several issues, one of which was the construction of a 1939 deed that reserved a royalty interest described as “one-fourth of the 1/8 royalty usually reserved by and to be paid to the land owner in event of execution of oil and gas leases, so that 1/4 of the 1/8 royalty to be paid to us, our heirs or assigns, if, as and when produced from the above described land ….” The court concluded that this was a “floating” royalty equal to 1/4th of the royalty reserved in the lease, not a fixed 1/4 of 1/8 royalty. This appears to be the correct result based on other recent cases construing similar language.

The fallout from the Texas Freeze in February 2021 continues. A year later, UT’s Austin Energy Institute concluded that multiple failures of power plants, gas processing plants, gas storage and distribution facilities, and gas production all contributed to the system failures. ERCOT management was fired; natural gas prices spiked to more than $400/MMBtu; politicians blamed wind and solar generation; the legislature passed legislation requiring the Public Utility Commission and the Railroad Commission to strengthen weatherization requirements for production, processing and generation facilities and has since criticized those agencies for failing to fix the problem. ERCOT drastically raised electricity prices during the storm, resulting in multiple bankruptcies. The legislature provided for securitization of about $7 billion in private losses caused by the storm, so those losses are spread over the next twenty years in customer rate increases. Expect new legislation in the upcoming session.

END_OF_DOCUMENT_TOKEN_TO_BE_REPLACED

“Account of a Visit from St. Nicholas”, as the poem was first called, was first published anonymously in New York’s Troy Sentinel newspaper on December 23, 1823. An college classmate from Troy, Jack Casey, recently told me of two trials in Troy over the authorship of the poem – the first, in 2013, resulting in a hung jury, and the second in favor of Henry Livingston Jr., a poet and farmer from Poughkeepsie, N.Y. Jack and his lawyer buddies dreamed up the idea for the trial, based on the long-running controversy over whether Livingston or Clement Clarke Moore, a professor of Middle East and Greek literature and theology, was its author. They never met, and Moore did not take credit for the poem until long after Livingston had died. Moore is considered by most as the author, but Mary Van Deusen, a descendant of Livingston, claims her great great great great great grandfather as the author. Donald Foster, a forensic linguist and Vassar college English professor, wrote a book, Author Unknown, supporting Mary, but Stephen Issenbaum, professor emeritus of history at the University of Massachusetts, wrote an article in 2001 in defense of Moore. 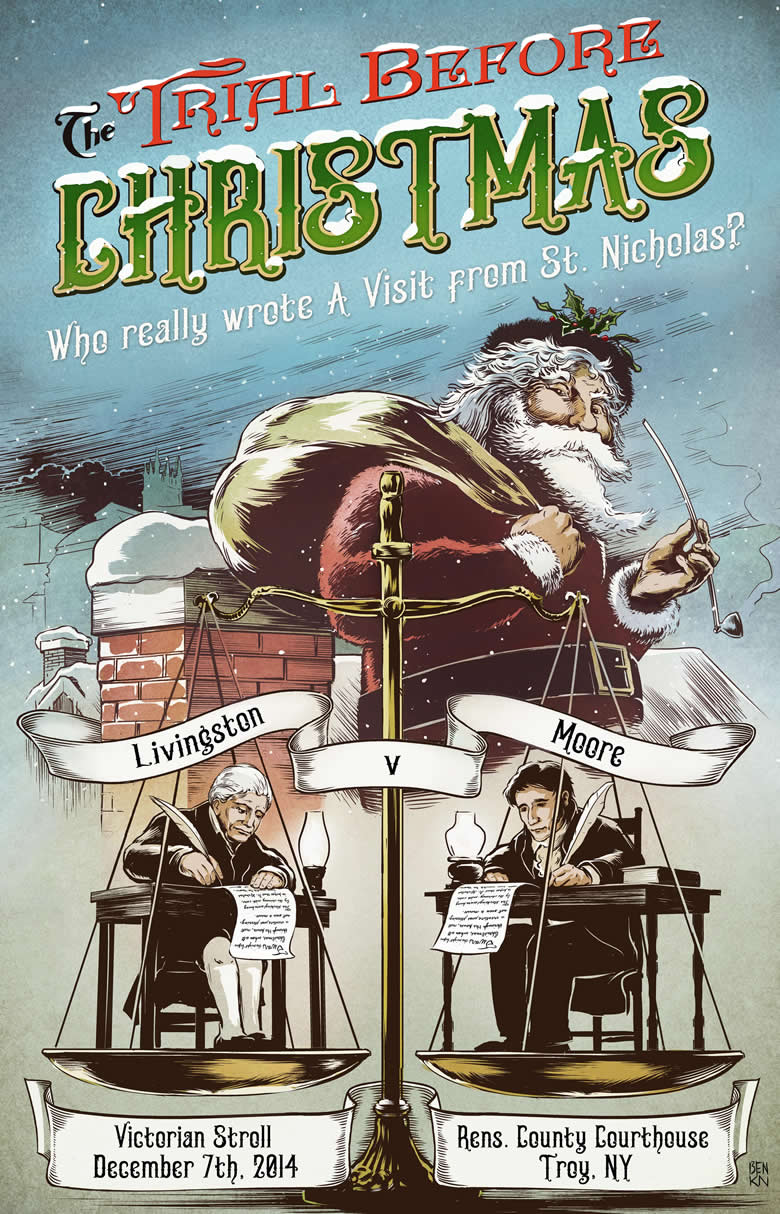 So, my classmate Jack Casey and his lawyer friends in Troy decided to try the matter in a court of law. Here’s the website describing the two trials, with pictures and everything. Livingston was declared the author by six jurors in the 2014 retrial, presided over by retired New York State Supreme Court Justice Edward O. Spain. Among the witnesses were the ghosts of Henry Livingston Jr., and Clement Clarke Moore. Over objections to ghosts taking the stand, Casey declaimed “If they can vote in Troy, they can testify,” referring to a long history of voter fraud involving deceased residents of Troy (depicted in Casey’s historical novel about a famous murder trial in Troy, The Trial of Bat Shea). Joining the two sides were Chris Post, a descendant of Moore, and Mary Van Deusen, Livingston’s descendant.

A version of the trial will be shown on the Hallmark Channel on December 17 and 18, although Casey did not get a part.

END_OF_DOCUMENT_TOKEN_TO_BE_REPLACED

Last week the Corpus Christi Court of Appeals issued a decision on a long-running dispute over reservation of a royalty interest in a deed. This is the court’s second opinion in the case.

In the court’s first opinion in 2018, the court construed the following royalty reservation:

END_OF_DOCUMENT_TOKEN_TO_BE_REPLACED

Mayfield and Ingham leased several sections in Sutton County to EnerVest. EnerVest produces gas which goes to a gas plant for processing and pays royalty on the residue gas and natural gas liquids, after deducting post-production costs. The gas must be compressed and dehydrated before sale, and EnerVest does not pay royalty on the fuel used in compression and dehydration. Mayfield and Ingham sued EnerVest seeking royalties on the fuel gas.

The San Antonio Court of Appeals held that, under the lease royalty provisions, EnerVest does not owe royalties on fuel gas. EnerVest v. Mayfield, No. 04-21-00337-CV.

The lease provides for payment “on gas produced from said land and sold or used off the premises, … the market value at the mouth of the well of one-eighth of the gas so sold or used.” Another lease clause provides:

END_OF_DOCUMENT_TOKEN_TO_BE_REPLACED

A good article in Texas Tribune about the growing problem of P-13 wells that are leaking and contaminating land and groundwater.

When an oil and gas operator drills a dry hole or decides to abandon a well, instead of plugging the well it can transfer the well to the surface owner to re-complete as a water well. The parties file a Form P-13 with the Railroad Commission to accomplish that change in ownership. The Commission and the operator contend that the surface owner then becomes responsible for plugging the well. But apparently the law is not so clear on the issue. The Middle Pecos Groundwater District contends that some 40 P-13 wells in its area are the responsibility of the Railroad Commission to plug as orphan wells. The problem is exacerbated by operators using a shallow formation to dispose of produced water; the formation is pressured up and unplugged P-13 wells become a conduit for flowing polluted salt water to come up the wellbore. 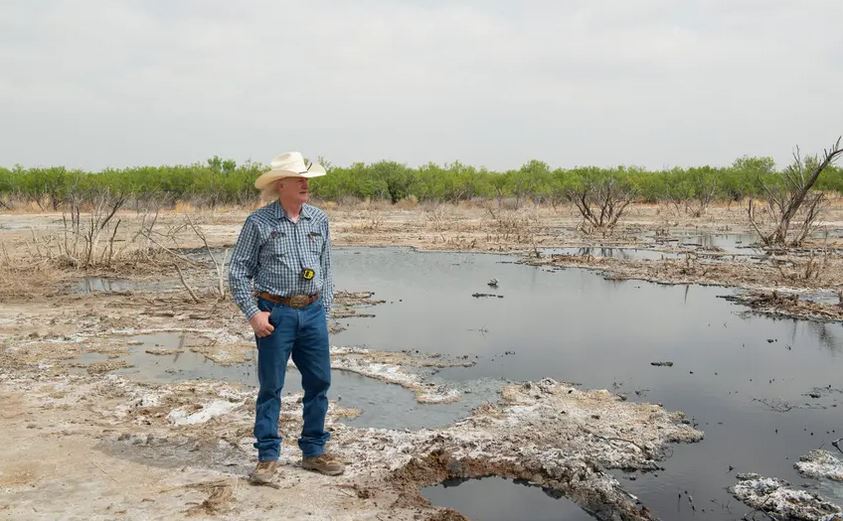 Underground cited Mapco, Inc. v. Carter, 808 S.W.2d 262 (Tex.App.–Beaumont 1991), rev’d on other grounds 817 S.W.2d 686 (Tex 1991), in support of its claim to storage rights. Mapco has often been cited as lending uncertainty to the issue of whether the surface owner owns the pore space under its land. The Beaumont court in Mapco, without citing any authority, held that the mineral owner had storage rights for underground storage facilities. After reviewing other authority, the Corpus Christi court concluded that, contrary to Mapco, “the well-recognized, decisional law states that the mineral estate owner owns the minerals but not the subsurface. … Therefore, we decline to follow Mapco in this case.”

Storage rights have become a more important issue recently with the advent of CO2 sequestration projects in Texas. Although the court did not cite Lightning Oil v. Anadarko, Lightning would seem to support its conclusion as well.

Our firm is hosting its 7th annual seminar for Texas land and mineral owners on topics of interest in oil, gas, and energy law, including:

END_OF_DOCUMENT_TOKEN_TO_BE_REPLACED

Alberta Griffith owned a 1/7th interest in the surface and minerals in a section of land in Reeves County. When she died her interest passed to her two sons, Albert and David, subject to a life estate interest in her surviving husband. In 1975, the husband and sons signed an oil and gas lease to Billings, reserving a 1/8th royalty. A well, the Meriwether No. 1, was completed on the lease.

In 1998, there was a small tax debt owed by Mr. Griffith and Albert on their royalty in the Meriwether lease. That year the taxing districts filed suit to foreclose tax liens against several hundred defendants, including Mr. Griffith and Albert. In the suit their interests were each described as a .005952 decimal interest in the Meriwether lease (each owning a royalty of 1/3 of 1/7 of 1/8 royalty). Judgment was entered foreclosing the lien, the interests were sold at Sheriff’s sale, and the interests came to be owned by Magnolia, LLC.

END_OF_DOCUMENT_TOKEN_TO_BE_REPLACED

Last year KUT produced a podcast, “The Disconnect,” chronicling the February 2021 Texas freeze and blackout. KUT has now produced Part 2: “The Disconnect: Power, Politics and the Texas Blackout,” explaining what has happened since–what has been fixed, the cost in electric bills, and the aftermath–hosted by KUT reporter Mose Buchele. An excellent look at what the legislature, regulators, gas producers and generators have and have not done to prevent future system failures.

Yesterday the Texas Railroad Commission approved new regulations requiring well, gas plant and pipeline operators to winterize their facilities. Critics are skeptical they will do the job.