Two recent appellate opinions illustrate why landowners and their counsel need to know the basic fundamentals of field rules and how they can affect provisions in oil and gas leases. I wrote about those cases in 2015. Both involve the interaction between field rules and lease provisions. ConocoPhillips Co. v. Vaquillas Unproven Minerals, Ltd., 2015 WL 4638272 (Tex.App.-San Antonio Aug. 5, 2015), was appealed to the Texas Supreme Court but settled before the court acted on ConocoPhillips’ petition. Endeavor Energy Resources, L.P. v. Discovery Operating, Inc., 448 S.W.3d 169 (Tex.App.-Eastland 2014), has been briefed on the merits and is awaiting the court’s decision on whether to grant review. You can read my summary of the two cases here.

The root of the issue is that oil and gas lease forms typically refer to and adopt field rules to regulate how large pooled units and earned acreage units can be. For example, a printed form oil and gas lease that has been commonly used in Texas for many years contains the following provision:

Lessee is hereby granted the right, at its option, to pool ur unitize any land covered by this lease with any other land covered by this lease, and/or with any other land, lease, or leases, as to any or all minerals or horizons, so as to establish units containing not more than 80 surface acres, plus 10% acreage tolerance; provided, however, units may be established  … so as to contain not more than 640 acres plus 10% acreage tolerance, if limited to … gas, other than casinghead gas…. If larger units than any of those herein permitted, either at the time established, or after enlargement, are required under any governmental rule or order, for the  drilling or operation of a well at a regular location, or for obtaining maximum allowable from any well to be drilled, drilling or already drilled any such unit may be established or enlarged to conform to the size required by such governmental order or rule.

To understand how the italicized sentence in this lease form works, one must know what governmental rules govern the size of units for drilling wells at a “regular” location, and for “obtaining maximum allowable” from a well. These regulations are included in “field rules” adopted by the Texas Railroad Commission. (Warning: this post is longer than usual, so be prepared.) END_OF_DOCUMENT_TOKEN_TO_BE_REPLACED

Below is a press release from the Texas Railroad Commission about the “enhancement” of its website to provide reports of enforcement data related to oil and gas operations.  The web page where the data can be viewed is here.

I have written before about the need for the RRC to put enforcement data online. At present it is not possible for landowners to track RRC actions in response to landowner complaints about operator activities. Compare the non-specific data provided on the RRC website to the specific online complaint-tracking process made available to Colorado residents by its Oil & Gas Conservation Commission, found here. The RRC wants you to know that it is doing its job, without disclosing details of any particular enforcement action. The Colorado Oil & Gas Commission provides useful information to landowners on how to make and track their complaints involving oil and gas activities. 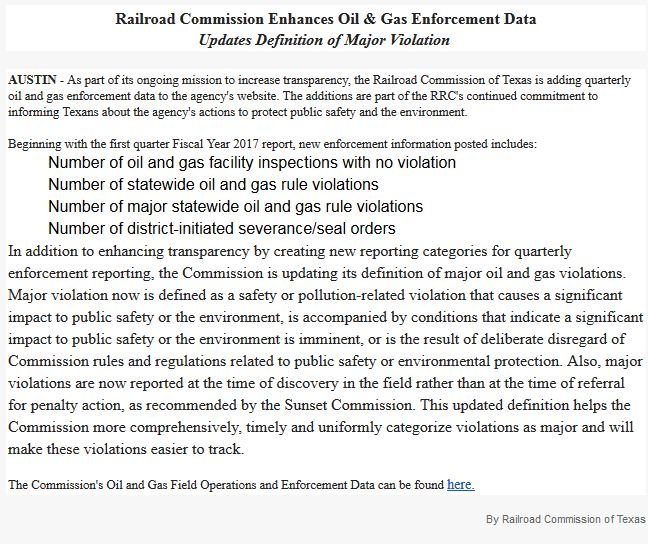 In Atmos v. DISH, the town of DISH and residents of the town are seeking damages for injuries they claim are caused by noise and emissions from defendants’ gathering and compression facilities located in and near the town. The trial court dismissed plaintiffs’ claims, but the Amarillo Court of Appeals held that the plaintiffs had stated causes of action and were entitled to trial. For a more detailed description of the case, read my post here.  Among other arguments, the pipeline companies assert that plaintiffs’ claims are barred because their activites were authorized by governmental regulations and imposing liability for lawful activities would allow judicial regulation of activities sanctioned by statute and regulation. The Amarillo court disagreed: “Just because Appellees are operating their natural gas compression facilities within the applicable regulatory guidelines does not mean that Appellants have not suffered compensable injuries as a result of those operations.”

Sabine Oil & Gas makes a similar argument in Forest Oil v. El Rucio. (My prior posts on this case can be found here and here.) Sabine (formerly known as Forest Oil) argues that Jimmy McAllen’s $20 million arbitration award for damages caused by pollution of his ranch should be reversed because the case interferes with the Railroad Commission’s jurisdiction over oil field contamination. The RRC has jurisdiction over cleanup of environmental contamination related to oil and gas activities and has an open proceeding relating to Sabine’s efforts to remediate contamination on McAllen’s ranch. The Corpus Christi Court of Appeals held that Texas law expressly grants a landowner a private cause of action for damages caused by violation of Texas conservation laws and that McAllen’s claims should not be barred or stayed by the ongoing remediation activities supervised by the RRC. The court made reference to sections 85.321 and 85.322 of Texas Natural Resources Code, the first of which expressly grants a private cause of action for damages for violation of Texas conservation laws, and the second of which provides that nothing in the law governing Railroad Commission jurisdiction “shall impair or abridge or delay a cause of action for damages or other relief that an owner of land …. may have or assert against any party violating any rule or order of the commission or any judgment under this chapter.”

END_OF_DOCUMENT_TOKEN_TO_BE_REPLACED

The article below appeared in the latest newsletter of the Texas Land and Mineral Owners Association. It reviews the Texas Railroad Commission’s recent amendment of its Rule 15, dealing with dormant oil and gas wells. Thanks to TLMA and the author, Trey Scott, for giving me permission to publish his article. TLMA submitted comments on the proposed rule, arguing that the proposed amendments should not be adopted. Abandoned wells are a huge problem for Texas landowners and the public at large. Landowners should consider addressing the problem in their oil and gas leases, since the RRC has failed to do so.

As part of Railroad Commissioner Christi Craddick’s Texas Oilfield Relief Initiative, the Railroad Commission has adopted two proposed rulemakings to ease the administrative burden on oil-and-gas companies. The Commissioners amended Statewide Rule §3.15 (“Rule 15”) to relax the production requirements to return a well in active status, and the changes to Statewide Rule §3.28 will minimize the frequency of deliverability testing requirements for gas wells. END_OF_DOCUMENT_TOKEN_TO_BE_REPLACED

When I last wrote about this case, I reported that the Texas Supreme Court had denied the petition for review of the Corpus Christi Court of Appeals’ decision affirming a $15 million arbitration award against Forest. On motion for rehearing, the Supreme Court granted the petition for review. The case is fully briefed, but no date for oral argument has yet been set. See my earlier posts on the case here and here.

The Dallas Morning News has published an excellent, in-depth investigative report — “Seismic Denial? Why Texas Won’t Admit Fracking Wastewater is Causing Earthquakes,” by Steve Thompson and Anna Kuchment — about the Texas Railroad Commission’s failure to recognize or address the relationship between salt water disposal wells and earthquakes in North Texas, and the industry’s influence on the process. Anyone who wants to know how the Railroad Commission really works should read this article.  In an accompanying editorial, the News said:

The editorial remarks on the substantial campaign contributions received by commissioners, all of whom are elected, from exploration companies. The Commission is under sunset review (again) this session and must be re-authorized by the Legislature next year. The editorial continues:

END_OF_DOCUMENT_TOKEN_TO_BE_REPLACED

I ran across this video from the Austin American Statesman – a reporter asking people what is the business of the Texas Railroad Commission. Not many voters know. Once again, the Sunset Commission has recommended that the Commission’s name be changed to something like the Texas Energy Commission. Sounds like a good idea. But strange things happen at the Legislature.

The RRC has three commissioners, each elected state-wide for terms of six years. There is an open seat this year, so voters will be electing a new commissioner. The Republican candidate is Wayne Christian, a former state lawmaker from East Texas. His campaign platform includes fighting for right to life, supporting gun rights and opposing illegal immigration.  He represented District 9 in the Texas House until 2012, when he was defeated by Chris Paddie. Christian ran for RRC in 2014 and lost in a runoff to Ryan Sitton, currently on the RRC. Christian opposes changing the name of the RRC.

The democratic candidate is Grady Yarbrough.

END_OF_DOCUMENT_TOKEN_TO_BE_REPLACED

A major metro paper endorses a third-party statewide candidate… The Houston Chronicle has endorsed Libertarian Mark Miller in the race to replace David Porter on the three-member Texas Railroad Commission.

“Our editorial board interviews scores of candidates for political office every election year, but seldom do we find ourselves wholeheartedly endorsing a nominee from the Libertarian Party,” the editorial board wrote Tuesday night.  “Then again, seldom have we met a Libertarian candidate like Mark Miller.”