Information below passed on to me by a client, from a friend of a friend:

Following are charts and photos of a tour of Cline Shale exploration and operations yesterday afternoon. I remember the boom in the 50s and the late 70s. Those are minimal compared to the massive and very expensive boom taking place right now. I never imagined anything like this.

For instance, there are no small operators involved. Everyone leasing, building, drilling and operating has to be a major with very deep pockets. The road you will see in the first photo cost over $1 million to build. The wells are hitting 9,000 feet in this area and much deeper in other places. Each hydraulic fracturing operation (fracking) uses more than 5 million gallons of water. In just this area, railroad sidings have been built in Miles, San Angelo and Barnhart to unload sand and load oil. The railroad trains in San Angelo used to consist of a few dozen cars a week and now consist of 500 cars a day. And, really, this is just getting started.

END_OF_DOCUMENT_TOKEN_TO_BE_REPLACED

I recently read this astounding report from the Texas Tribune:

“In 2011, Texas used a greater number of barrels of water for oil and natural gas fracking (about 632 million) than the number of barrels of oil it produced (about 441 million), according to figures from the Texas Water Development Board and the Railroad Commission of Texas, the state’s oil and gas regulator.”

Of course wells use all of the water in the fracing process, at the beginning of the well’s life, and continue to produce oil for many years, so oil production will eventually catch up with water use. But this is nevertheless a remarkable statistic.

END_OF_DOCUMENT_TOKEN_TO_BE_REPLACED

UT’s Bureau of Economic Geology has issued a comprehensive report on the estimated reserves in the Barnett Shale Field. The study, funded by the Alfred P. Sloan Foundation, looked at 16,000 wells in the field. It has been submitted for peer review before publication, but a summary of the report can be found on the BEG website.

The BEG created a model with data from 15,000 wells drilled through 2010. Assuming a $4 constant gas price, the model predicts another 13,000 wells through 2030. It predicts total field production of 44 Tcf of gas through 2050. Here are two images showing results of the study: 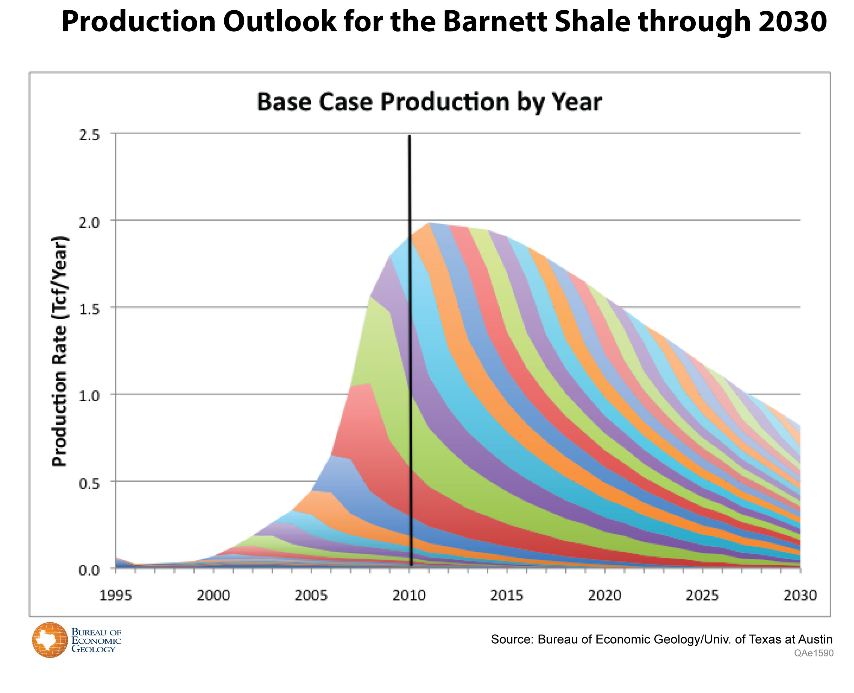 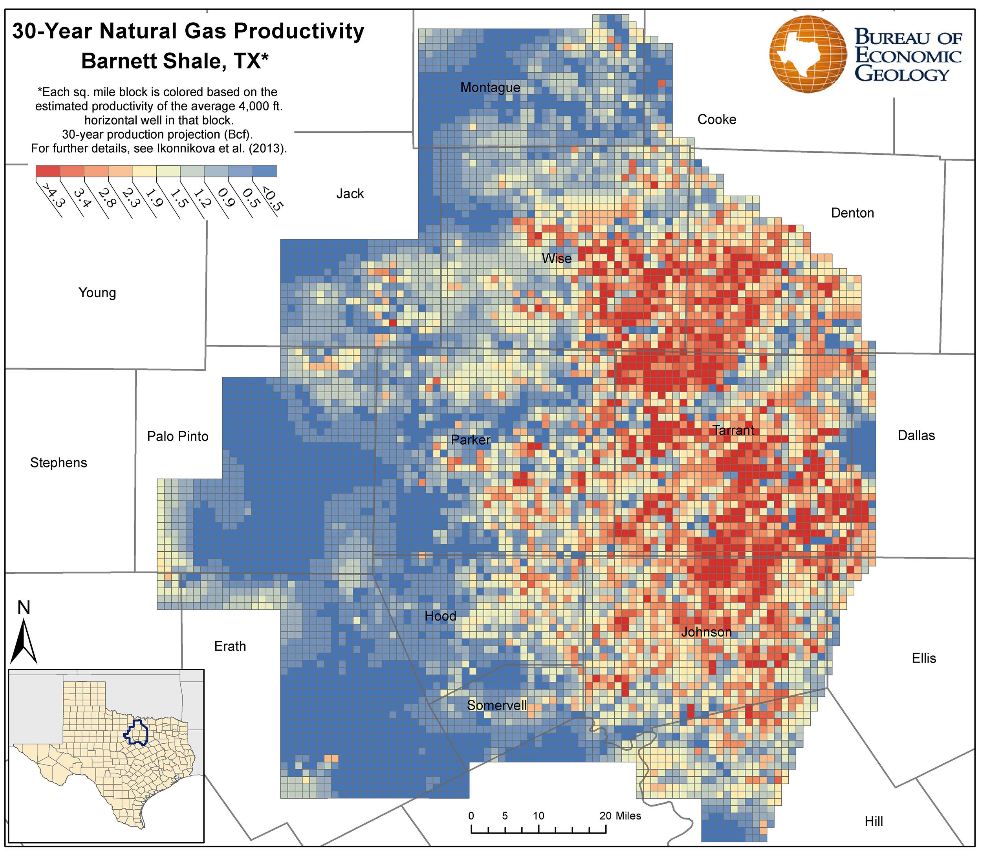 The BEG plans to complete similar studies of the Marcellus, Haynesville and Fayetteville Shales by the end of 2013.

END_OF_DOCUMENT_TOKEN_TO_BE_REPLACED

The E&P industry is continuing to face public criticism of its use of fresh groundwater in fracing wells and its failure to disclose the chemicals added to frac water.

On February 5, the Investor Environmental Health Network (IEHN) issued a press release announcing that shareholders have filed resolutions with Cabot O&G, Chevron, Exxon Mobil, EOG Resources, ONEOK, Pioneer Natural Resources, Spectra Energy, Range Resources and Ulta Petroleum challenging the companies “to quantifiably measure and reduce environmental and societal impacts” of their exploration activities. The resolutions focus on water issues, asking the companies to disclose the amount and sources of water used, how they track and measure naturally occurring radioactive materials (NORM) in frac water, whether and to what extent the companies use closed-loop systems in handling frac water, and what efforts are being made to reduce the amount of fresh water used. Shareholder proposals were filed by Calver Investments, Green Century Capital Management, the New York City Office of the Comptroller, the New York State Common Retirement Fund, the Sisters of St. Francis of Philadelphia, and Trillium Asset Management. IEHN and the Interfaith Center on Corporate Responsibility published a report in 2011, “Extracting the Facts: an investor guide to disclosing risks from hydraulic fracturing,” intended to list and encourage best risk management practices by E&P companies, including reducing and disclosing all toxic chemicals, minimizing fresh water use by substituting non-potable sources, and using closed-loop systems to store waste waters.

END_OF_DOCUMENT_TOKEN_TO_BE_REPLACED

FrackNation is a documentary by Phelim McAleer and Ann McElhinney, journalists from Ireland, in response to Josh Fox’s Gasland. It recently premiered in several locations and now can be seen on Mark Cuban’s cable channel AXS. I watched it this week, and it can be seen again on AXS February 2 at 2:30 pm Eastern time. It is worth watching and has received favorable reviews. 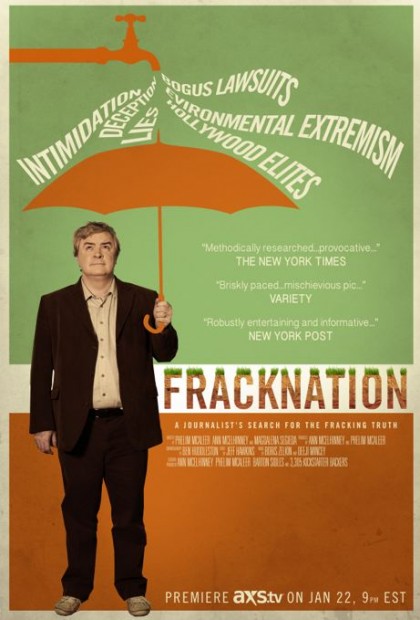 McAleer and McElhinney have previously done documentaries on global warming (Not Evil Just Wrong) and gold mining in Romania (Mine Your Own Business) that challenge conventional wisdom on environmental topics. McAleer got the idea for this new film when he confronted Josh Fox at a press conference in Chicago about scenes in Gasland showing tap water being lit on fire. McAleer pointed out that natural gas has been in well water long before the boom in hydraulic fracturing in Pennsylvania.

McAleer and McElhinney got their funding from Kickstarter, where 3,305 backers donated $212,000 to back the movie. (They’re all listed in the movie credits.)

END_OF_DOCUMENT_TOKEN_TO_BE_REPLACED

Texas Wesleyan Law Review’s Energy Symposium is March 21 and 22 in Fort Worth. It is focused on Hydraulic Fracturing and Shale Gas Development in the U.S. and abroad. Looks like a good program. Energy Symposium Brochure.pdf

The University of Texas’ Burear of Economic Geology has issued a draft report updating an earlier report on water use by the oil and gas industry in Texas. Among its conclusions: Movement of shale plays into oil-rich areas of the Eagle Ford and West Texas’s Permian Basin have resulted in increased use of brackish water for frac’ing, improvement in reuse technologies, and lower fresh water consumption, but also more demand on groundwater in regions of South and West Texas.

In the Eagle Ford, although the number of wells completed has increased rapidly, the intensity of water us (gallons per foot of completed interval) has decreased almost in half in four years. The report attributes this decreas in intensity to higher use of “gel” fracs that can carry proppant with much less water. Water use is significantly higher in the down-dip gas window of the play (as high as 1400 gal/ft) vs. the oil window (800 gal/ft). Here are graphs from the draft report about the Eagle Ford’s water use:

END_OF_DOCUMENT_TOKEN_TO_BE_REPLACED 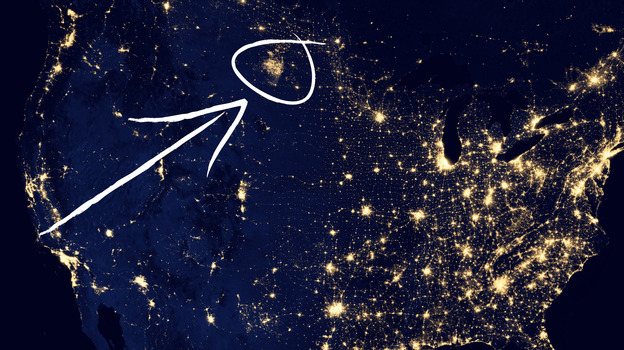 Here are two good websites that provide interesting and balanced views about energy production and consumption:  The Rational Middle, and Think Progress. The Rational Middle is a series of films by the people that produced the movie Haynesville – A Nation’s Hunt for an Energy Future. Its goal is to encourage rational thinking about our energy future and establishing achievable goals toward sustainable energy. The films about unconventional resources and the risks of hydraulic fracturing are worth looking at.

56.2% of the nation’s energy is wasted each year – from the Lawrence Livermore National Laboratory:

END_OF_DOCUMENT_TOKEN_TO_BE_REPLACED

I recently heard an interview with George Mitchell, the independent operator who found the key for combining hydraulic fracturing technology and horizontal drilling to unlock vast reserves of gas in the Barnett Shale, the first shale play. And it only took him 17 years to figure it out. Now 93 years of age, Mr. Mitchell was interviewed by American Public Media’s Marketplace radio program. You can view the interview here.

Mr. Mitchell has some unorthodox views for a wildcatter. First, his foundation, the Cynthia and George Mitchell Foundation, has given millions of dollars to support development of clean energy resources. And he supports a carbon tax on hydrocarbons.

Mr. Mitchell also supports tough regulation of independent operators. “I’ve had too much experience running independents,” Mitchell says. “They’re wild people. You just can’t control them. And if it doesn’t do it right, penalize the oil and gas people. Get tough with them.” Earlier this year, Mr. Mitchell told Forbes magazine that he is in favor of federal regulation of hydraulic fracturing by the U.S. Department of Energy.