Native Texan and Austinite Lawrence Wright, longtime journalist and Reporter at Large at the New Yorker, has written about Texas’ love affair with and dependence on oil, in the January 1 issue of the New Yorker. “The Dark Bounty of Texas Oil” is a 10,000-foot flyover of Texas’ oil business, from Spindletop to the Permian Basin. An excellent read.

When I began this blog, US oil and gas production was just beginning to rise out of a 35-year decline.

While Texas oil production is not back to its levels of the 1970’s, its rise since 2019 has been meteoric, fueled by the resurgence of production from the Eagle Ford and more recently the Permian. 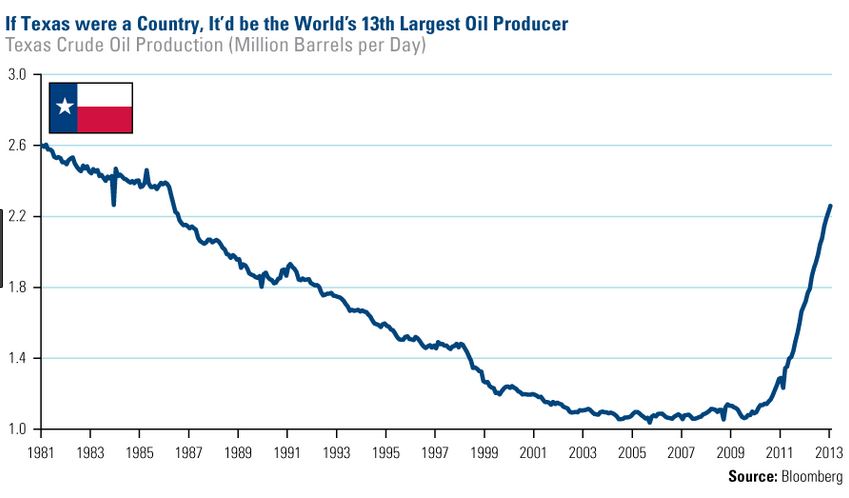 This resurgence of Texas and US production has changed the global landscape by reducing our dependence on foreign sources of hydrocarbons. It has also raised many environmental issues.

Wright covers topics I have written about over the last few years, including George Mitchell’s discovery of the fracking formula to unlock the Barnett Shale and his more recent warning of the environmental costs of exploration and production, the incidence of earthquakes and their connection to produced water disposal, environmental problems in the town of Dish, Apache’s Alpine High discovery, and the rise of Texas wind power. Wright muses on the future of oil in Texas, the state’s growth and its diversifying economy.

Like most oil and gas attorneys, my career has been defined by the boom-and-bust cycle of the oil and gas industry – in my case, seen from the lens of the Texas land and mineral owner.  But Texas is no longer defined by oil wells and cattle.  Austin is the new hub of technology and innovation in the state, with America’s fourth largest number of startups. San Antonio is a hub for cyber-security. Georgetown, north of Austin, now gets all of its electricity from renewable resources. Technology drives the oil and gas industry as well, lowering the per-barrel cost of finding and producing oil. The Dallas Federal Reserve says that Texas tax collections from the oil industry make up only five percent of its total tax collections. In many ways Texas has benefited from low gasoline prices. This is the new Texas. It will be interesting to see what surprises the new year holds.