Here’s a novel idea: use gas that would otherwise be flared to generate electricity in the field and use it to mine bitcoin. Believe it or not, it is being done. In North Dakota, Equinor and Enerplus are among the operators using the process. New companies like Crusoe Energy have sprung up to provide the in-the-field equipment. Crusoe has some 40 mobile generating units in oil shale basins and plans on increasing that number to 100. A recent conference in Houston on the subject saw 200 oil and gas execs and bitcoin miners in attendance.

Bitcoin is a cryptocurrency or digital currency, created in 2009. There is no physical coin, only a balance kept on a public ledger. It can be used to purchase goods and services, for those companies that accept bitcoin as payment. Mostly, bitcoin are bought and sold as a type of investment. As of this writing, one bitcoin sells for $47,706.80. Bitcoins are not backed by any hard asset or any government.

So what is “mining” bitcoin? See explanation here. “Bitcoin mining is performed by high-powered computers that solve complex computational math problems; these problems are so complex that they cannot be solved by hand and are complicated enough to tax even incredibly powerful computers.” One with a computer that solves the problem is given a “block reward,” currently 6.25 bitcoins. The amount of electricity being used to run computers mining bitcoin is enormous; the global bitcoin industry’s consumption of electricity is causing emissions of 60 million tons/year of CO2. That’s the equivalent of about nine million cars.

Of course the portable units that use natural gas to generate electricity burn that gas, causing CO2 emissions, just like flaring. But the argument is that using the gas to generate electricity is much more efficient than flaring, which often ends up emitting volumes of methane that are not fully combusted. Crusoe Energy contends that its bitcoin mining system avoids as much as 2/3 of methane emissions that would occur if the gas were vented or flared. 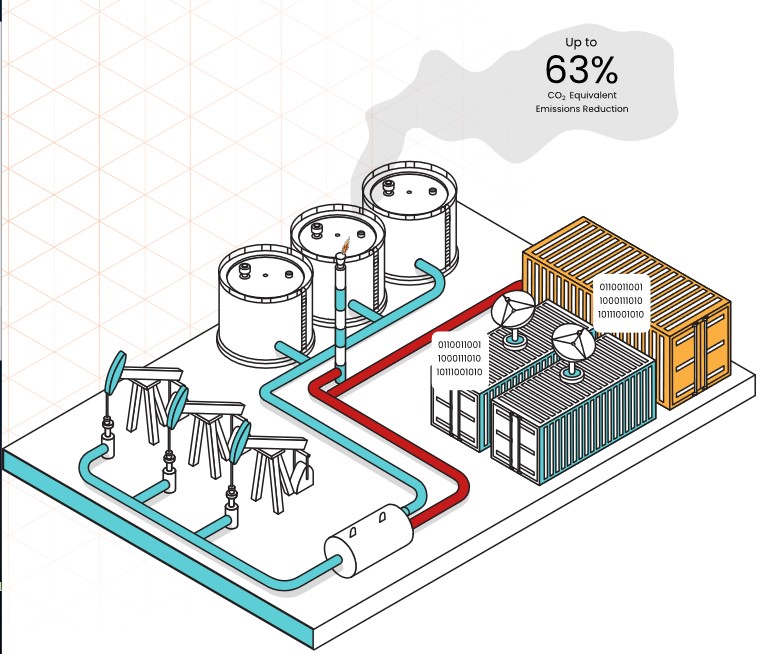 As much as sixty percent of bitcoin mining occurs in Asia, where the principal fuel is coal. Proponents of these new portable systems argue that they move bitcoin mining to the US, using cleaner-burning gas which would otherwise be wasted.

North Dakota and Wyoming recently passed laws giving tax breaks to producers that provide gas to cryptocurrency and other data miners that would otherwise be flared.

What does this mean for royalty owners? Maybe they’ll get some royalty on gas sold to the bitcoin miners, rather than seeing their gas go up in smoke.