“The world’s biggest plant to capture CO2 from the air just opened in Iceland,” from the Washington Post.

The plant in Iceland, dubbed Orca, can remove 4,000 tons of CO2 per year. The plant uses heat from geothermal energy, plentiful in Iceland. The CO2 is pumped underground. Cost: $600/$800 per ton. Climate scientists say some one billion tons of CO2 will have to be removed from the atmosphere every year by 2050 to meet climate goals.

“Mini nuclear” plants are the subject of substantial investment by the Department of Energy, Berkshire Hathaway, and several utilities, and Bill Gates-founded TerraPower. “TerraPower’s 345-megawatt Natrium reactor will cost about $1 billion, with a levelized cost of electricity—or generation cost over the plant’s lifetime—estimated in the $50 to $60 range per megawatt-hour, according to a company spokesperson.” Mini nuclear plants have about one-third the generating capacity of traditional nuclear plants.

Meanwhile, renewable energy sources continue to grow as a percentage of electricity generation. 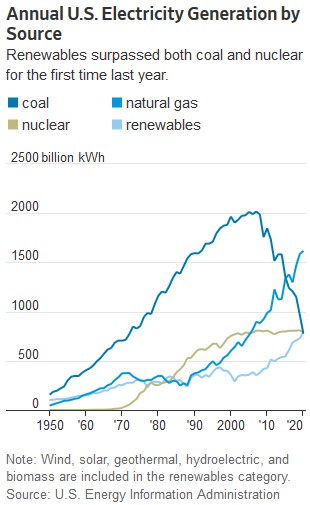