The New York Times reported recently that the number of mobile or “walking” drilling rigs in operation now exceeds the number of conventional rigs, by 650 to 500. “Pad drilling” — the drilling of multiple wells from a single pad site — has now become the norm in unconventional plays, and these walking rigs make drilling from a single pad site more economical and efficient. Moving a rig to a new location now takes a matter of hours instead of days. The new rigs cost up to $20 million. The increased effeciency of these rigs has actually reduced the rig count while increasing the number of wells drilled, and has caused the Energy Information Administration to develop a new rig-efficiency measure.  The combination of walking rigs and multi-well drillsites results in significant reductions in drilling costs. Continental Resources, the largest player in the Bakken, says it now can drill 14 wells from a single pad.

EIA’s new Drilling Productivity Report shows how the new technology has affected production in the major shale plays. Here is its graph for the Eagle Ford: 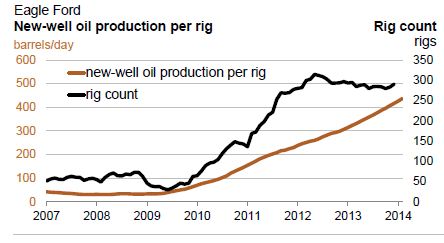 Here is an annual comparison for several shale plays: 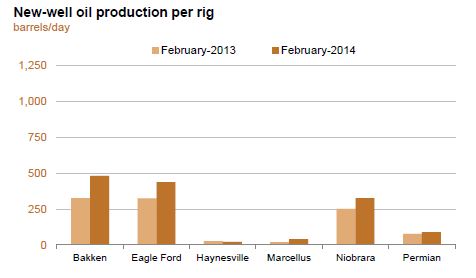