Hughes’ report is filled with graphs illustrating production and consumption world-wide and by field. Here is an example:

The Haynesville, Barnett, Fayetteville, and Woodford plays, which collectively produce 68 percent of United States shale gas, are late-middle-aged in terms of the life cycle of shale plays. Unless there is a substantial increase in gas price and a large ramp-up in drilling, these plays will go into terminal decline. The prognosis for the top nine shale plays in the United States, which account for 95 percent of shale gas production, is presented in Table 2. 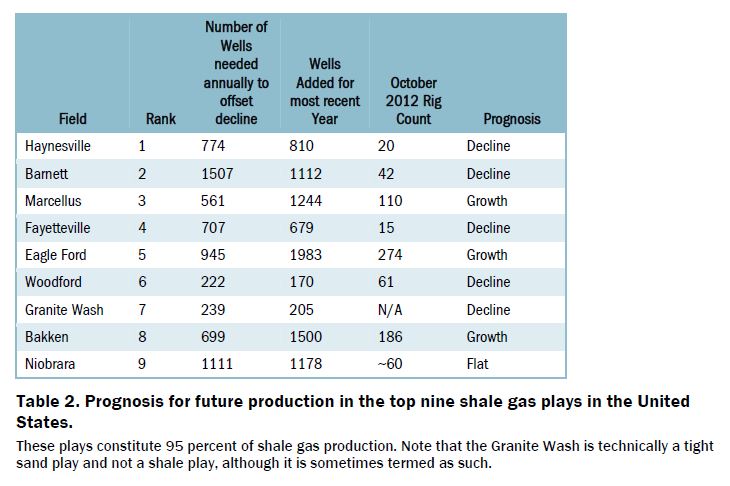 Hughes also discusses the two biggest oil shale plays, the Bakken and the Eagle Ford. Together, these fields produce more than 80 percent of tight oil production in the US. “Overall field decline rates are such that 40 percent of production must be replaced annually to maintain production.”

Some figures from Hughes’ discussion of the Eagle Ford: 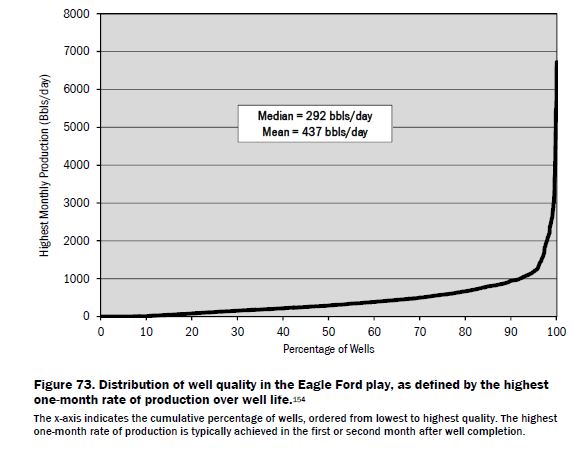 “The future production profile of the Eagle Ford–assuming a total of 11,406 effective locations, a 40 percent overall field decline, and current rates of drilling with all new wells performing as in 2011–is illustrated in Figure 75. This yields a production profile which rises 34 percent from June 2012 levels to a peak of 0.891 million barrels per day in 2016 as illustrated in Figure 75. At this point, with all well locations drilled, production declines at the overall field decline rate of about 40 percent. The overall field decline may decrease somewhat over time after peak as wells approach terminal decline rates. This also assumes that 70 percent of the wells drilled to date have targeted the oil-rich portion of the
Eagle Ford play. Total oil recovery in this scenario is about 2.23 billion barrels by 2025, which agrees quite well with the EIA’s estimate of 2.46 billion barrels.157 Average well production falls below 10 bbls/d in this scenario by 2021.” 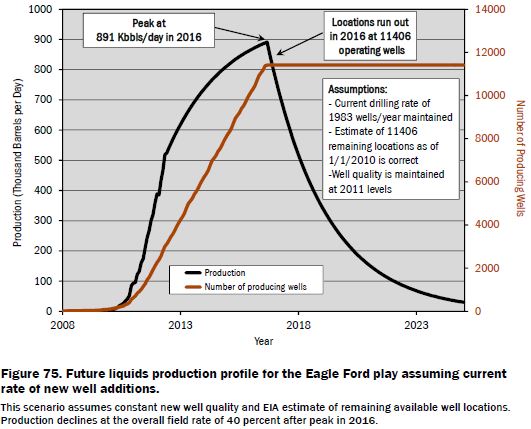 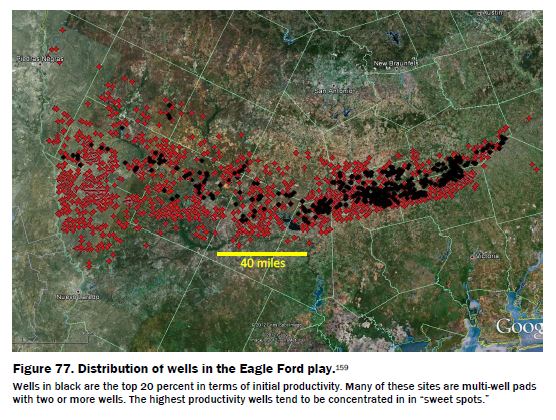 Hughes’ report provides a wealth of data and puts the “shale boom” in perspective. He may be overly pessimistic, but he certainly makes one think about the world’s unsustainable thirst for hydrocarbons.