Almost a year ago, a district court in Travis County ruled that the Texas Railroad Commission had violated Texas’ Administrative Procedure Act by issuing a well permit to Magnolia Oil & Gas after informally adopting rules for issuance of permits for allocation wells and “PSA” wells (production-sharing-agreement wells) without complying with the APA. On April 27, the Third Court of Appeals will hear oral argument in the appeal of that ruling by the Commission and Magnolia.

In addition to briefs by the parties, the court of appeals has received briefs from Texas Oil & Gas Association, Pioneer Natural Resources, and American Exploration and Production Council, all in support of the Commission’s appeal, and from Ron Beal, a professor emeritus at Baylor Law School, in support of Appellees.

The case is Railroad Commission of Texas and Magnolia Oil & Gas Operating LLC v. Elsie Opiela and Adrian Opiela, Jr., Case No. 03-21-00258-CV. Briefs can be viewed here. My firm represents the Opielas. You can read my previous post about the case here.

This bill, signed by the Governor, fixes a problem with the provisions of the Texas Business and Commerce Code that grant a security interest in oil and gas production and proceeds to secure the payor’s obligation to pay royalty owners. I have written about this problem before. Previous bankruptcy court decisions held that this provision did not protect royalty owners when the payor was a company not organized in Texas.

END_OF_DOCUMENT_TOKEN_TO_BE_REPLACED

Today a district court in Travis County held that the Texas Railroad Commission violated the Administrative Procedure Act by informally adopting rules for issuance of allocation and production sharing well permits without following the rule-making procedures of the Act. The Court ruled in an appeal by a mineral owner of the Commission’s order granting a well permit to Magnolia Oil & Gas Operating for a well in Karnes County.

The case is Opiela v. Railroad Commission of Texas, No. D-1-GN-20-000099, in the 53rd District Court of Travis County. Judge Karin Crump’s order can be viewed here. Opiela v. RRC Final Judgment (003) Our firm represents the Opielas in the case.

Magnolia’s well, the Audioslave 1H, was originally permitted by Enervest as an allocation well. The Opielas protested the permit, and while the protest was pending the Commission issued the permit and Enervest drilled the well. Magnolia then took over operation of the well and filed an application for an amended permit for the well as a production-sharing well. That permit was also granted over the Opielas’ protest, and Magnolia fracked and completed the well.

END_OF_DOCUMENT_TOKEN_TO_BE_REPLACED 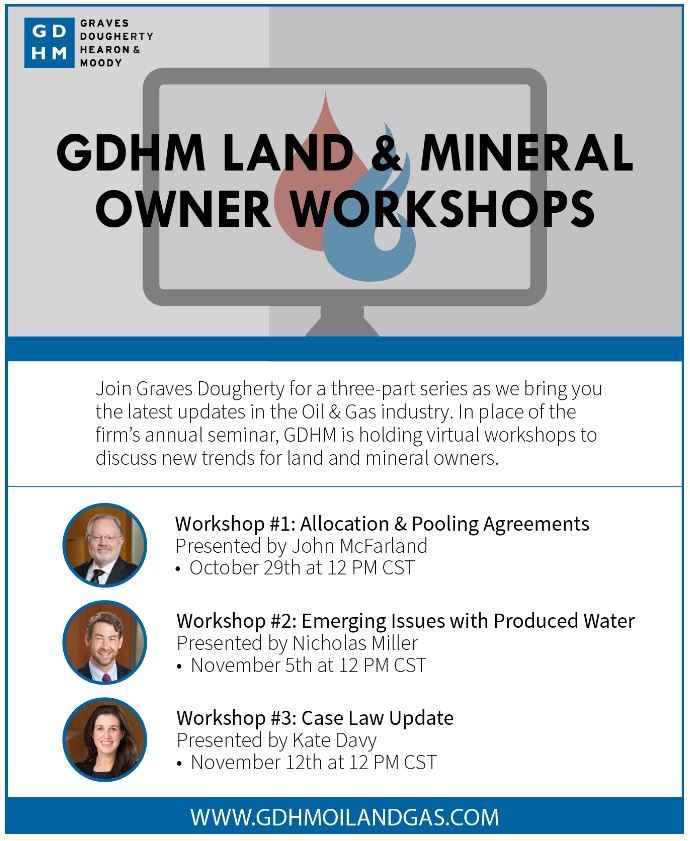 We’ve recently seen several requests for royalty owners to sign a production sharing agreement for a unit-line or lease-line allocation well. Such a well would be drilled along the boundary of two existing leases or pooled units.  So, unlike most allocation wells, production can’t be allocated based on the portion of the well’s productive lateral length on each lease or pooled unit. Instead, the production sharing agreement may propose to allocate production between the two leases or units in one of two ways – 50-50 to each unit, or based on acreage.

Allocating production between the two leases or units for such a well presents at least two problems:  first, the actual drilled wellbore cannot actually be drilled exactly down the boundary line between the two leases or units. The wellbore will deviate, sometimes significantly, from a straight line. Second, the well may not actually be drilled down the unit line, but might be on one side or the other of the unit line, but too close to the unit line to avoid drainage or a special Rule 37 spacing permit. In addition, the wellbore might extend beyond the boundary into another lease or unit. Wellbores are getting longer and longer.

So I think the better practice is to allocate production for a unit-line allocation well based on acreage. In effect, it is the same allocation that would result if a pooled unit were created for the well.

END_OF_DOCUMENT_TOKEN_TO_BE_REPLACED

Here is a permit plat for a new MD America Well in Madison County. All wells shown, including the new well, are in the MadisonVille, W. (Woodbine -A-) Field. Every well but two on the plat is an allocation well. Click on image to enlarge. 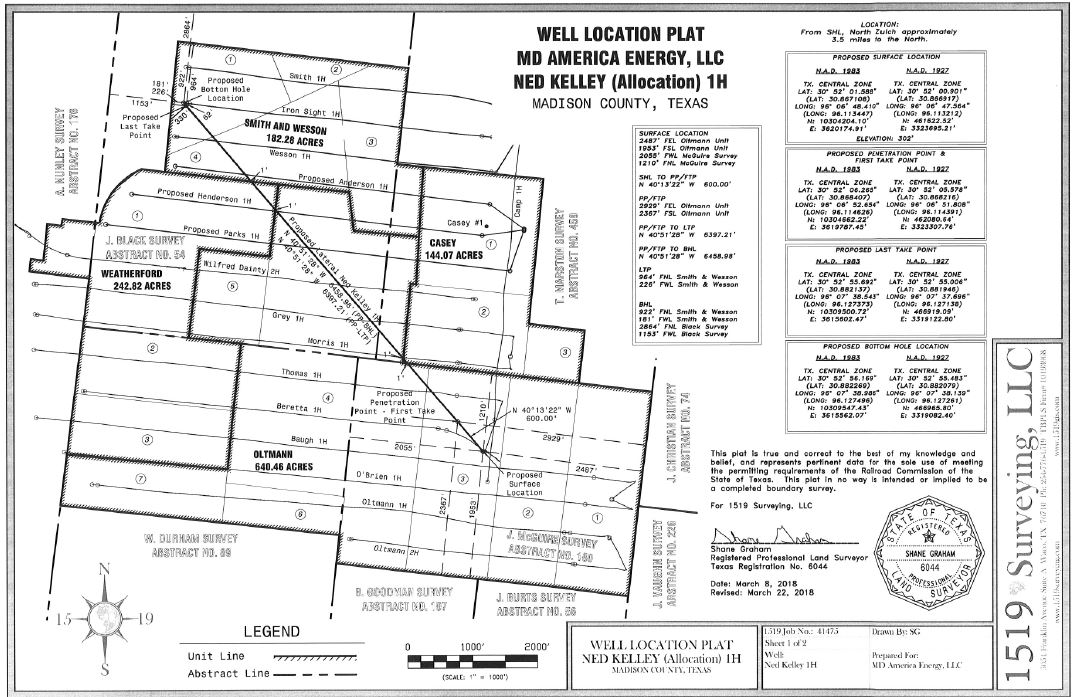 Devon’s proposed well is called the NI Helped 120 6H Well.  (The odd name comes from an old TV commercial in which the line “‘n I helped!” appears.) The permit and plats for the well can be viewed here.  N I Helped 120 6H Permit and Plat

Our firm filed a similar suit a few years ago on behalf of the Klotzman family challenging an allocation well permitted by EOG. EOG and the Klotzmans settled their dispute shortly after they appealed the RRC’s grant of EOG’s permit.  For my discussions of the Klotzman case, search for “Klotzman” in this site’s search engine.

END_OF_DOCUMENT_TOKEN_TO_BE_REPLACED

A client recently asked me whether he should sign a production sharing agreement. I replied that this is not an easy question to answer.

First, the nomenclature.  These terms are not defined anywhere and their usage is not always consistent, but here’s what I mean when I use these terms:

END_OF_DOCUMENT_TOKEN_TO_BE_REPLACED

Three recent articles have intensified the debate over whether allocation wells are authorized by a typical oil and gas lease. Two of the articles appear in the most recent edition of the Section Report of the Oil, Gas & Energy Resources Law Section of the State Bar. The first, written by Ernest E. Smith, makes clear in its title the position of the author: Applying Familiar Concepts to New Technology: Under the Traditional Oil and Gas Lease, a Lessee Does not Need Pooling Authority to Drill a Horizontal Well that Crosses Lease Lines. View here: Applying Familiar Concepts  A later version of his article will be published in the Texas Journal of Oil, Gas and Energy Law at the University of Texas School of Law. The second article is by Ronald D. Nickum, an oil and gas attorney in Amarillo, titled Non Consent Allocation – Will it Survive Judicial Scrutiny. View here:  Non Consent Allocation Mr. Nickum’s article is more skeptical about the legality of allocation wells.

Professor Smith’s article is written in rebuttal to an article to be published in the Baylor Law Review written by Professor Bret Wells, Allocation Wells, Unauthorized Pooling, and the Lessor’s Remedies, which can be viewed here. Professor Wells argues that allocation wells are a form of pooling not authorized by a typical oil and gas lease and give rise to claims for trespass and punitive damages.

The Texas Railroad Commission ruled in the Klotzman case that it had the authority to issue permits to drill horizontal wells that cross multiple lease lines without pooling those leases together. Although the Commission has never adopted a rule defining or authorizing permits for such wells, an “allocation well” has generally come to be understood as a well that crosses one or more lease lines and that produces from more than one lease without pooling those leases and without any agreement with the royalty owners as to how production will be allocated among the leases crossed by the well. Because of the uncertainty as to the legality of allocation wells, exploration companies sought legislation in the last legislative session expressly authorizing such wells. That bill, HB 1552, died in committee. It is expected that similar legislation will be filed in the upcoming session.

END_OF_DOCUMENT_TOKEN_TO_BE_REPLACED

So you have received a division order, and it says that ABC Oil Company will pay you for a .015625 royalty interest in the Barn Burner Unit #1 Well. How do you know whether the .015625 interest is correct?

To understand division orders, it is helpful to understand how exploration companies handle royalty payments. When a company decides it wants to drill a well in a particular area, it first hires landmen who investigate the mineral title to the tracts in the area where the well will be drilled and identify the mineral owners of those tracts. The company or its landmen then contact those mineral owners and negotiate oil and gas leases covering their interests. Depending on the complexity of the mineral title, there may be dozens or even hundreds of mineral owners from whom oil and gas leases must be obtained. The company may want to acquire leases in a large area around its proposed drillsite, in order to lock up the minerals in that general area so that additional wells can be drilled if the exploratory well is successful. END_OF_DOCUMENT_TOKEN_TO_BE_REPLACED