Last week the Texas Supreme Court issued a per curiam opinion, without oral argument, reversing the judgment of the El Paso Court of Appeals  in Sundown Energy LP v. HJSA No. 3 Limited Partnership, No. 19-10654. The lease at issue covers 30,450 acres in Ward County. The case is another illustration of how parties fail to clearly express their intent in drafting retained acreage clauses.

The lease provides that, after the end of its six-year primary term, the lessee must release acreage not held by production unless the lessee was engaged in a “continuous drilling program:”

The obligation . . . to reassign tracts not held by production shall be delayed for so long as Lessee is engaged in a continuous drilling program on that part of the Leased Premises outside of the Producing Areas. The first such continuous development well shall be spudded-in on or before the sixth anniversary of the Effective Date, with no more than 120 days to elapse between completion or abandonment of operations on one well and commencement of drilling operations on the next ensuing well.

END_OF_DOCUMENT_TOKEN_TO_BE_REPLACED

A colleague recently pointed out to me that I had miss-read the Texas Supreme Court’s recent opinion in Endeavor Energy Resources v. Energen Resources Corporation. In my previous post on the case I said that the Court had concluded that the retained acreage clause being construed was ambiguous and had remanded the case for a trial on the meaning of the clause. Instead, the Court concluded that, because the clause was ambiguous, it should be construed in favor of the lessee, Endeavor.

The retained acreage clause in Endeavor’s lease allowed the lessee to retain all interest in the leased premises if, after the primary term, it drilled a new well every 150 days. The clause also allowed

Endeavor to “accumulate unused days in any 150-day term … in order to extend the next allowed 150-day term between the completion of one well and the drilling of a subsequent well.” If and when the lessee failed to do so, the lease will terminate except as to specified acreage earned by wells then completed and producing. The dispute was over the meaning of the quoted language. Endeavor argued that the language allowed it to carry forward unused days across multiple 150-day terms; or alternatively, Endeavor argued that the language is ambiguous and that “the disputed language may not operate as a special limitation.” The Court concluded that the clause was indeed ambiguous and, because it operates as a “special limitation” on the lessee’s title, it should be construed in favor of the lessee.

[I]t has long been the rule that contractual language will not be held to automatically terminate the leasehold estate unless that “language … can be given no other reasonable construction than one which works such a result.” Knight, 188 S.W.2d at 566 (citing Decker, 216 S.W. 38). As explained above, the Lease’s description of the drilling schedule required to avoid termination is ambiguous under these circumstances. Courts should not treat an obligation so “lacking in definiteness and certainty as introducing” into a lease a “limitation[] leading to …termination of [a] vested estate[].” W.T. Waggoner Estate, 19 S.W.2d at 31. Because the disputed provision is ambiguous, it cannot operate as a special limitation under these circumstances.

In other words, the tie goes to the lessee. END_OF_DOCUMENT_TOKEN_TO_BE_REPLACED

Texas courts are very reluctant to hold that oil and gas lease provisions are ambiguous. The same holds true for deeds and wills. These instruments affect title to land, and if an instrument is ambiguous it inserts uncertainty into land titles and results in litigation over the parties’ intent using extrinsic evidence, usually before a jury. Such litigation often ends up with each party testifying as to what they meant in the instrument, leaving a jury with little go to on. Or the instrument in question is so old that no person is alive who could testify as to the parties’ intent.

But in Endeavor Energy Resources v. Energen Resources, the Supreme Court reached the conclusion, after eighteen pages of reasoning, that it was impossible to tell from the language in the lease what the parties intended, and that it was ambiguous. The Court remanded the case to the trial court to admit evidence of the parties’ intent.

END_OF_DOCUMENT_TOKEN_TO_BE_REPLACED

Last April the Texas Supreme Court issued its opinion in Endeavor Energy Resources, L.P. et al. v. Discovery Operating, Inc., et al., No. 16-0155, construing a retained acreage clause in an oil and gas lease.  I commented that the opinion commented in dicta that, even if a lease allows the lessee to retain “tolerance acreage” as allowed by applicable field rules, the operator must “verify that additional acreage is actually necessary or required to achieve the maximum allowable,” quoting from a 2015 CLE paper by Phillip C. Mani.  On rehearing, the Court revised the language I quoted, so that it now reads as follows (click to enlarge): 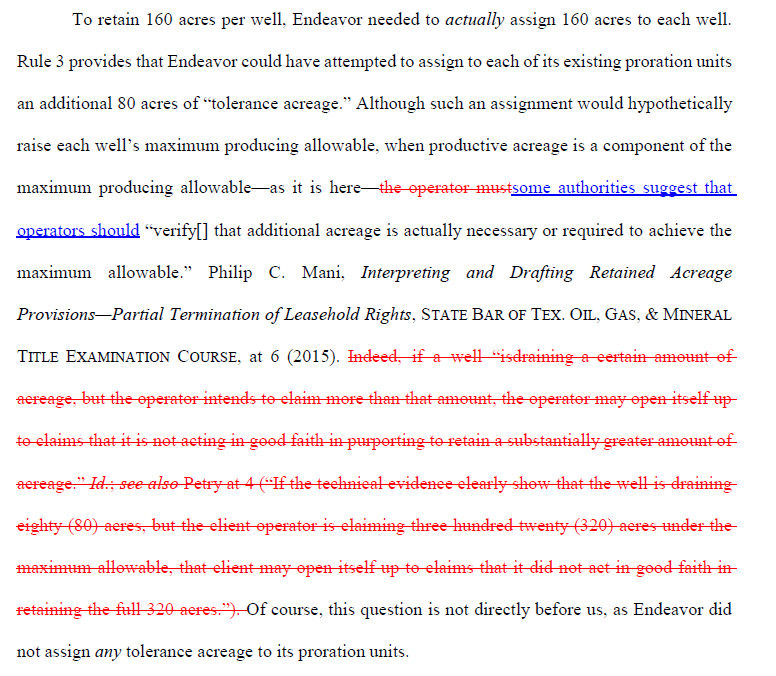 So the court watered down its language somewhat.  The issue nevertheless remains an open one.