Last March the El Paso Court of Appeals decided Cimarex Energy v. Anadarko Petroleum, No. 08-16-00353-CV.  The facts are these:

Cimarex leased a 1/6th interest in 440 acres in Ward County. Anadarko leased the remaining 5/6ths.  Cimarex asked Anadarko to let Cimarex participate in wells on the leases under a joint operating agreement, but Anadarko refused. Anadarko drilled two wells, carrying Cimarex as a non-consenting co-tenant. Cimarex sued for an accounting. The parties settled, Anadarko agreeing to an accounting and to pay Cimarex its share of net profits from the wells. Cimarex paid its royalty owner for its share of production “according to the terms of its lease, dating back to the date of first production.”

But at the end of the primary term of the Cimarex lease – December 21, 2014 – Anadarko stopped paying Cimarex, claiming its lease had expired. Anadarko took a new lease from Cimarex’s lessor. Cimarex sued Anadarko for breach of the settlement agreement. The trial court held that Cimarex’s lease had expired and dismissed its suit. On appeal, the Court of Appeals affirmed. Cimarex has now filed a petition for review in the Supreme Court.

END_OF_DOCUMENT_TOKEN_TO_BE_REPLACED

The San Antonio Court of Appeals handed down its opinion last week in Strickhausen v. Petrohawk Operating Company, No. 04-18-00636-CV.  The issue: Did Ms. Strickhausen ratify a pooled unit not authorized by her lease, or is she estopped from contesting the validity of the unit, because she accepted royalty checks calculated on her unit interest in production? The trial court held that she did; the Court of Appeals reversed and remanded, holding that there were issues of fact as to whether she intended to ratify or was estopped. 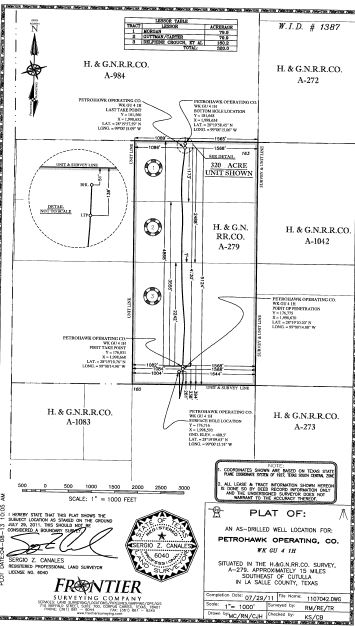 Ms. Strickhausen owns a 1/2 mineral interest in Tract 3 shown above. Her lease prohibits pooling without her consent. Without obtaining her consent, Petrohawk filed a pooled unit designation including her lease and drilled the well. It then asked Ms. Strickhausen to ratify the unit. Settlement negotiations were unsuccessful. Petrohawk sent Ms. Strickhusen checks for her share of unit production, which she cashed, but her attorney continued to tell Petrohawk that she objected to the pooled unit.

END_OF_DOCUMENT_TOKEN_TO_BE_REPLACED

Like most subjects, understanding oil and gas law is often a matter of knowing the terminology – WI, RI, ORRI, NPRI. These terms are often used in a confusing way and the definitions sometimes overlap. So I’m going to try to clear things up.

END_OF_DOCUMENT_TOKEN_TO_BE_REPLACED

The Texas Supreme Court recently refused to consider the case of Devon Energy Production Company v. Apache Corporation, decided by the Eastland Court of Appeals – 550 S.W.3d 259. The case presents issues that, remarkably, have not previously been considered by a Texas appellate court.

Norma Jean Hester leased her one-third mineral interest in lands in Glasscock County to Apache, reserving a 1/4th royalty. The other mineral owners in the land (the Lessor Plaintiffs) leased their two-thirds mineral interest to Devon, reserving a 1/4th royalty.  Apache and Devon were unable to agree on terms for a joint operating agreement to develop the property, and Apache drilled seven producing wells on the land without Devon’s participation. Devon became what is commonly called a “non-consenting co-tenant.”  Devon became entitled to two-thirds of the net revenue from each well after Apache had recovered the costs of drilling and production (“payout”).  But Devon did not pay its Lessor Plaintiffs their royalty on production, claiming that Apache owed the royalties to the Lessor Plaintiffs. The Lessor Plaintiffs sued Devon and Apache for their royalties.

In Devon v. Apache, No. 11-16-00105-CV, the Eleventh Court of Appeals sheds some light on a vexing problem that remarkably has never been addressed by a Texas court.  To understand the problem, consider the facts in Devon v. Apache:

Norma Jean Hester leased her one-third mineral interest in land in Glasscock County to Apache, reserving a one-fourth royalty. The remaining mineral owners leased to Devon, also reserving a one-fourth royalty. Apache and Devon were not able to reach agreement on joint development of the property, and Apache drilled seven wells on the property without Devon’s participation. Under Texas law, Devon and Apache were co-tenants, and Apache is obligated to account to Devon for 2/3rds of the net profits from the wells, which Apache did. But Apache refused to pay Devon’s royalty owners. END_OF_DOCUMENT_TOKEN_TO_BE_REPLACED

The Texas Supreme Court recently decided JPMorgan Chase Bank v. Orca Assets GP, LLC, No. 15-0712, an interesting exposition on the value and risks of including no-warranty language in an oil and gas lease.

JPMorgan was trustee of the Red Crest Trust, which owns about 40,000 acres of minerals in the Eagle Ford Shale. In 2010, JPMorgan leased about 1,800 of those acres to GeoSouthern Energy. Later that year, JPMorgan was approached by another company, Orca Assets GP, to lease some of the same land.  JPMorgan’s trust offer erroneously concluded that the acreage Orca wanted had not been previously leased to GeoSouthern, and he negotiated a deal to lease to Orca.  But he put the following provision in the proposed leases to Orca:

Negation of Warranty.  This lease is made without warranties of any kind, either express or implied, and without recourse against Lessor in the event of a failure of title, not even for the return of the bonus consideration paid for the granting of the lease or for any rental, royalty, shut-in payment, or any other payment now or hereafter made by Lessee to Lessor under the terms of this lease.

END_OF_DOCUMENT_TOKEN_TO_BE_REPLACED

I got the idea to start this blog after I made a presentation to a landowner group in which I distributed a checklist for negotiating an oil and gas lease.  Soon thereafter, I began receiving calls from people who had found the checklist on the internet. The organization that sponsored my presentation had posted it on their website, and people searching for help on negotiating a lease found it.  I decided that I should investigate this internet thing more closely, and that led to my decision to start this blog.

I have updated my checklist, and you can find the new and improved version here:  Checklist for Negotiating an Oil and Gas Lease

And on a sadder note, I would like to mourn the passing of Tommy Nobis, the best linebacker ever to play for the University of Texas. He played for UT 1963-65, and was a member of its 1963 national championship team.  He had a great professional career with the Atlanta Falcons, where he was the franchise’s first draft pick in 1966 and was known as “Mr. Falcon.” He still holds the record in the NFL for most tackles in a season, at 294.  Nobis died December 13. He attended the football banquet at St. Stephen’s Episcopal School in 1965 where I was a sophomore and played defensive guard and center. My jersey, like Nobis’s, was number 60. He and I both sported a flat-top haircut, and for the rest of my high school football career my nickname was “Nobis.”  Requiescat in pace, Tommy.

On September 22, the Texas Supreme Court refused to reconsider its opinion in BP America v. Red Deer Resources, No. 15.0569 – after some 16 amicus briefs and letters were filed urging the court to grant Red Deer’s motion for rehearing.

The Court addressed the construction of a shut-in royalty clause in an oil and gas lease:

END_OF_DOCUMENT_TOKEN_TO_BE_REPLACED

Last May, the San Antonio Court of Appeals issued an opinion in Texas Outfitters Limited v. Nicholson, No. 04-16-00392-CV, addressing the duty of holders of the mineral executive right to its non-executive mineral owner – a case now pending on application for writ of error in the Texas Supreme Court. It is the first significant appellate opinion on the duty of the executive since the Supreme Court’s decision in Lesley v. Veterans Land  Board on the same topic. The case tells the remarkable story of a landowner’s failure to carry out its duty of “utmost fair dealing” in exercising – or in this case failing to exercise – its executive right.

The two previous cases from the Texas Supreme Court, In re Bass, 113 S.W.3d 735 (Tex. 2003) and Lesley v. Texas Veterans Land Board, 352 S.W.3d 479 (Tex. 2011), sent mixed signals on the scope of the executive-rights holder’s duty. In Bass, the court held that the holder of the executive right had no duty to enter into an oil and gas lease, but only to exercise utmost fair dealing if it elected to lease. In Lesley, the court backed off its previous holding, deciding that the holder of the executive right could breach its duty by failing to lease – or in Lesley’s, case, imposing restrictive covenants on the land that made it impossible to lease.

END_OF_DOCUMENT_TOKEN_TO_BE_REPLACED

With the drop in oil prices has come a wave of litigation over underpayment of royalties. Multiple suits have been filed against Repsol (formerly Talisman) over its royalty payments in the Eagle Ford. Multiple suits against Devon for royalty underpayment have been consolidated into a multi-district docket in San Antonio. A federal court in Fort Worth has certified a class action against Devon for underpayment of royalties in the Barnett Shale. Conoco is settling class actions brought in Oklahoma that also cover class members in Texas. These suits allege underpayments of royalty on oil and gas. The San Antonio multi-district suits also allege breach of lease provisions requiring the lessee to protect the lease against drainage from wells on adjacent properties.

These cases present opportunities for plaintiffs’ attorneys to earn large contingency fees. They also point out the problems faced by land and mineral owners in determining whether their lessee is complying with their oil and gas lease. What should landowners do to monitor lease compliance?

There are no easy answers to these questions. Below are some suggestions.