WSJ Weighs In On Fracing Controversy

The Wall Street Journal gives its opinion on the dangers of hydraulic fracturing, siding with the industry: “The shale gas and oil boom is the result of U.S. business innovation and risk-taking. If we let the fear of undocumented pollution kill this boom, we will deserve our fate as a second-class industrial power.”

The Digest reported on wells drilled so far in Eagle Ford fields in Texas. Enough information is now publicly available to begin to see where the play is headed, and where it’s most successful. 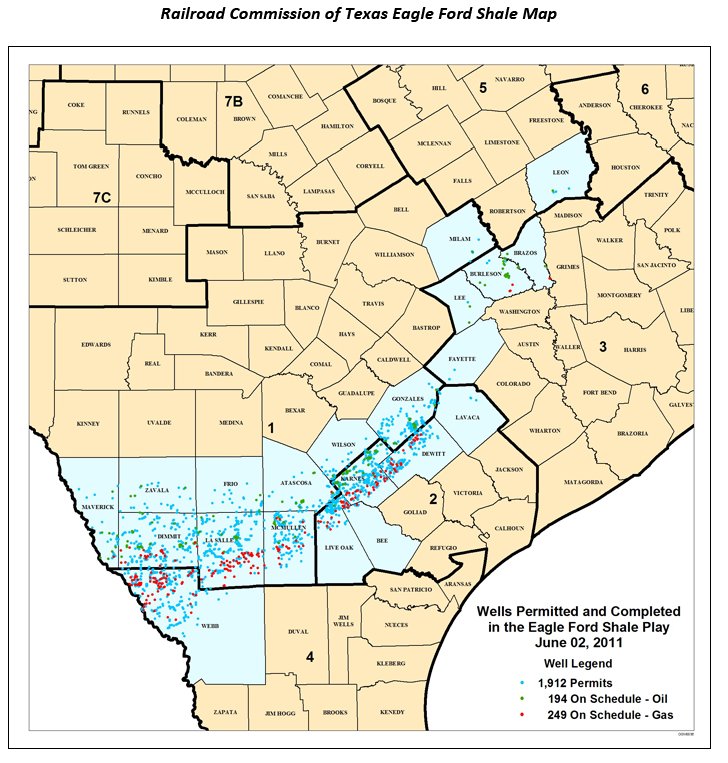 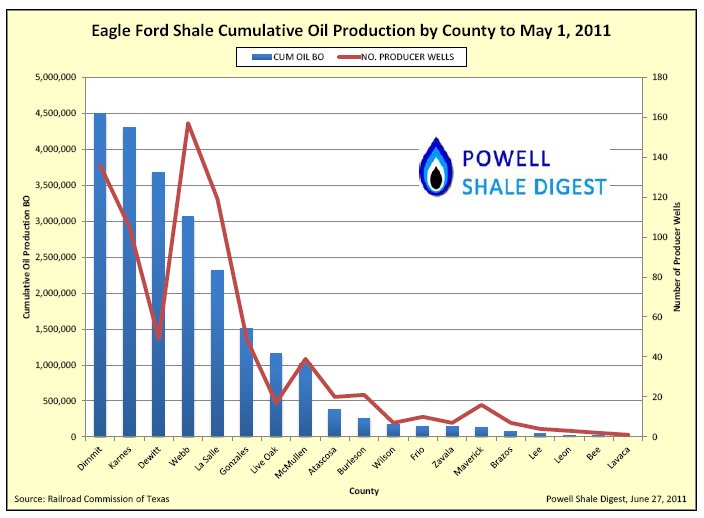 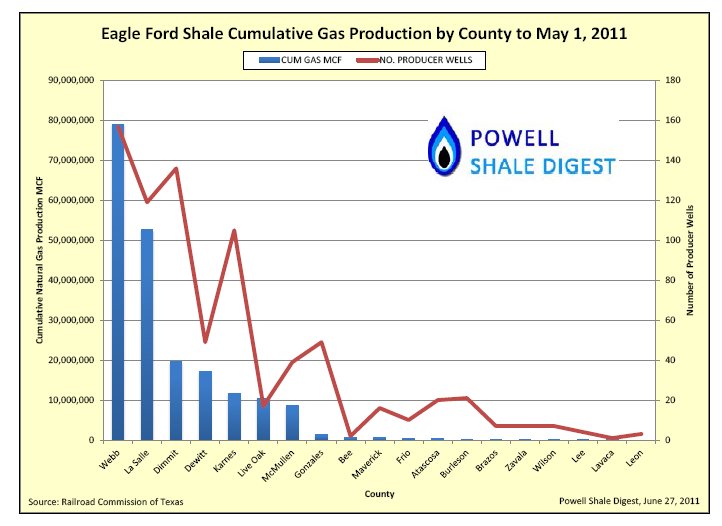 END_OF_DOCUMENT_TOKEN_TO_BE_REPLACED

Fracking has become more and more a topic in the general media and part of the state and federal environmental energy agenda, with new stories appearing daily. A sample:

Secretary of Energy Steveb Chu has appointed an advisory panel, officially called the Secretary of Energy Advisory Board’s subcommittee on natural gas, to study the environmental issues around hydraulic fracturing and shale gas production.  Members of the subcommittee are John Deutch, former head of the CIA during the Clinton administration, in the Department of Energy during the Carter administration, now a professor at MIT, and former board member of Schlumberger, Ltd.; Daniel Yergin, IHS Cambridge Energy Research Associates Chairman; Susan Tierney, Chair of the board of the Energy Foundation; Stephen Holditch, chair of the Department of Petroleum Engineering at Texas A&M; Fred Krupp, President of Environmental Defense Fund; Kathleen McGinty, former head of Pennsylvania’s Department of Environmental Protection; and Mark Zoback, geophysics professor at Stanford University. Steven Chu, Secretary of Energy, has charged the subcommittee to make recommendations on ways to improve safety of fracking in 90 days, and offer advice to other agencies within six months on how they can better protect the environment from shale gas drilling.  http://thehill.com/blogs/e2-wire/677-e2-wire/164057-overnight-energy-fracking . Beginnings of the subcommittee’s work have not shown promise: at the first meeting of the committee, Dusty Horwitt of the Environmental Working Group said its chairman John Deutch should resign because of his former ties to Schlumberger and Cheniere Energy. On the other side, Republicans including Darrel Issa (R-Calif), chair of the House Oversight and Government Reform Committee, have said that Chu’s subcommittee is composed primarily of Democratic appointees hostile to drilling interests.

END_OF_DOCUMENT_TOKEN_TO_BE_REPLACED

Researchers at the Nicholas School of the Environment at Duke University have written an article published in the Proceedings of the National Academy of Sciences titled “Methane contamination of drinking water accompanying gas-well drilling and hydraulic fracturing,” which finds “systematic evidence for methane contamination of drinking water associated with shale-gas extraction” in the Marcellus Shale in Pennsylvania and New York. The article has already elicited a strong response from the industry. To my knowledge, this is the first scientifically based study finding a correllation between the drilling of shale wells and the contamination of aquifers.

END_OF_DOCUMENT_TOKEN_TO_BE_REPLACED

The April issue of Discover, published by Kalmbach Publishing Co., contains an article on the potential environmental effects of hydraulic fracturing in gas shales, “Fracking Nation,” by Linda Marsa. Much of the article simply repeats allegations being made by environmental groups and landowners of alleged groundwater contamination by shale wells. But the article mentions four newer topics and recent allegations being made by opponents of shale gas development:

END_OF_DOCUMENT_TOKEN_TO_BE_REPLACED

The EPA has issued its draft plan to study the impacts of hydraulic fracturing on drinking water in the U.S. Two state regulatory authorities have absolved frac’ed wells from responsibility for contaminating drinking water in Colorado and Texas. Maryland’s top einvornmental regulator urged lawmakers to impose a two-year moratorium on frac’ing, as Maryland’s legislature considers additional laws to regulate the practice. Meanwhile, the boom in shale gas drilling continues.

END_OF_DOCUMENT_TOKEN_TO_BE_REPLACED

Here is the closing statement of Range Resources filed with the Texas Railroad Commission after its hearing on complaints that Range’s Barnett Shale wells in Parker County have contaminated groundwater.  It provides a good summary of the events to date and the evidence produced at the hearing.  Range Production Company Closing Statement.pdf

Here is a link to a summary of the Range dispute prepared by Gene Powell, Editor of the Powell Barnett Shale Newsletter.

Josh Fox’s movie Gasland has been nominated for an academy award for best documentary. Gasland, widely criticized by the oil and gas industry, alleges that hydraulic fracturing is the cause of contamination of underground water resources across the country. (See my previous post about controversy surrounding the movie here.) The nomination, and the Fox’s movie about the alleged dangers of frac’ing, have made him into a celebrity.

In response to the Oscar nomination, Energy in Depth, a website sponsored by oil and gas associations including the Independent Petroleum Association, Texas Independent Producers and Royalty Owners’ Association, the Independent Oil & Gas Association, and Colorado OIl and Gas Association, has published a letter (Energy In Depth letter.pdf) addressed to the Academy of Motion Picture Arts and Sciences. In the letter, Energy in Depth calls the film an “expression of stylized fiction” not meeting the Academy’s criteria for a documentary. The letter says that the movie misstates the law and the rules, mischaracterizes the frac’ing process, and “flat-out makes stuff up.”

Josh Fox does not take this lying down. He has published a detailed rebuttal of Energy in Depth’s letter.  Josh has own his own website, www.gaslandthemovie.com, and his own facebook page about the movie and the frac’ing debate, and he was even awarded the Yoko Ono “Grant for Peace.” Clearly, he is enjoying his celebrity. Josh’s rebuttal is no small refutation. It runs to 38 pages and contains responses from his “amazing team of experts,” including Ron Bishop, PhD, lecturer in chemistry and biochemistry at SUNY Oneonta, Anthony Ingraffea, PhD, the D.C. Baum professor of engineering at Cornell,and Weston Wilson, a retired EPA engineer.  Energy in Depth’s letter to the Academy is not likely to lessen Josh’s time in the limelight and may actually increase his chances of grabbing that Oscar.

END_OF_DOCUMENT_TOKEN_TO_BE_REPLACED

Last week, a hearing was held before examiners at the Texas Railroad Commission to determine the source of water well contamination in Parker County. The Environmental Protection Agency had previously entered an emergency order finding that Range Resources was responsible for charging rural water wells with natural gas in Parker County, a finding that Range has vehemently denied. The Railroad Commission called the hearing after the EPA issued its order, to receive facts and testimony on the source of the contamination.

I have posted previously about this controversy, here, here, and here.

Range contends that the water wells are contaminated from gas migrating from a shallow gas-bearing formation just below the water table, the Strawn formation.  The EPA’s order says that it did an isotopic fingerprint analysis of the gas found in the water wells matched the gas from Range’s nearby wells producing from the Barnett Shale.

END_OF_DOCUMENT_TOKEN_TO_BE_REPLACED

Dallas attorney Windle Turley has filed three lawsuits in federal court in Dallas on behalf of landowners alleging contamination of their groundwater by Barnett Shale Wells: one on behalf of Jim and Linda Scoma of Johnson County, against Chesapeake, filed last June; one on behalf of Doug and Diana Harris, against Devon Energy, and one on behalf of Grace Mitchell against Chesapeake and Encana. The suits contend that plaintiffs’ groundwater has been contaminated by drilling and hydraulic fracturing operations. A copy of the Harrises’ suit can be viewed here.  Turley says more such suits will follow. Turley’s website has a page dedicated to such suits, which says that, “when hydro-fracking occurs, it is possible for the property owner’s groundwater to become contaminated and/or for gases to be forced into the groundwater. When this happens, the oil company may be liable to the property owner for property damages and injuries. … The Turley Law Firm is very concerned over the damage done and future risk to property and individuals in the Barnett Shale area, and is filing damage suits on behalf of property owners.” Groundwater contamination lawsuits may become new fertile ground for plaintiffs’ attorneys.

Range Resources has written to Al Armendariz in EPA’s Dallas office again asserting that it is not responsible for the groundwater contamination in Parker County.  Range’s letter can be viewed here:  12-27 Armendariz letter.pdf  For my previous posts on this controversy, go here and here.

Range met with EPA staff on December 15, and it says that, as a result of the meeting, Range and EPA agree that “hydraulic fracturing in the Barnett Shale cannot be the cause of natural gas occurring in the domestic water wells identified by the EPA.”  Range also made clear in the letter that, while it was complying with the requirements of EPA’s order, it did not believe that the EPA had authority to issue its order, since Range was not responsible for the pollution and the order was issued “without any prior notice or opportunity for Range to present important objective facts.”